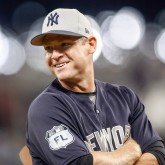 No, it wasn’t just you. The Yankees and Rays began the season by shifting more than any two teams in baseball. Entering Thursday, Tampa Bay had shifted 44 times in its three games against New York—the second-most in baseball—and the Yankees ranked sixth with 26. That’s 70 freaking infield shifts. To provide some context, the Cubs—a great […] 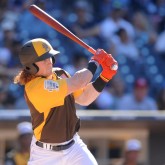 Sometimes, players are traded while they’re sleeping, or working out, or eating…but rarely are they traded while they’re in the john. Clint Frazier was the “mystery caller” on MLB Network’s “Hot Stove” on Monday, and told Harold Reynolds and Matt Vasgersian that he was notified of his trade to New York when he got back from using […] 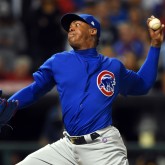 After trading him at last year’s deadline, the Yankees are bringing back closer Aroldis Chapman on a five-year, $86 million deal, Fox Sports’ Ken Rosenthal reports. With Dellin Betances bobbling the closer’s workload, the Yankees were in the market for a closer this off-season. They got their top target, who was reportedly seeking a six-year, $100 million […] 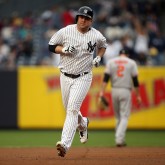 The Yankees had reportedly been chatting with the Astros about a potential Brian McCann deal, and now they’ve struck a deal. New York agreed to send McCann—and more importantly, money to cover his salary—to Houston in exchange for right-handed pitchers Albert Abreu and Jorge Guzman, they announced on Thursday night. Abreu, 21, has had a steady beginning […] 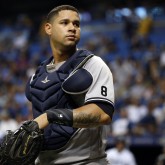 Despite a historic couple of months, Gary Sanchez fell well short of winning this year’s American League Rookie of the Year award. The Yankees backstop picked up just four of 30 first-place votes, to Fulmer’s 26. With 23 second-place votes, though, he was the runaway runner-up, for what it’s worth. Sanchez is the fifth Yankee to finish […] 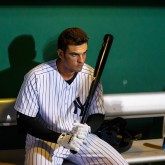 Yankees youngsters Gleyber Torres and Greg Bird, playing for the Scottsdale Scorpions of the Arizona Fall League this offseason, showcased their power in a 9-7 win on Thursday. The 19-year-old Torres, who earned Player of the Week honors on Tuesday, hit an absolute moonshot in the third inning off Braves prospect Chris Ellis. It was his […] 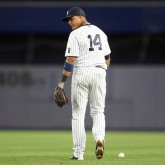 NEW YORK — The Yankees’ playoff hopes died on Thursday night, and they couldn’t do a thing about it. With Baltimore’s 4-0 win in Toronto, there are now just four teams left in contention for a wild card spot–the Blue Jays, Orioles, Tigers and Mariners. No Yankees. So, Thursday marked one of four meaningless games they’ll play until […] 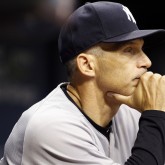 The Yankees’ tragic number is down to eight. After a big 11-5 win in Tampa on Wednesday, New York fell to rookie Blake Snell and company, 2-0. Snell was on for five innings, striking out five and allowing just five hits, and old friend Chase Whitley had an easy go of it in building a bridge […] 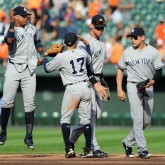 After being held scoreless by Baltimore in three straight meetings, the Yankee bats rose from the grave, breaking out for three runs in the first in a 5-2 victory. It wasn’t Gary Sanchez, Starlin Castro or even Aaron Judge doing the damage; Chase Headley and Austin Romine drove in four of the five runs. The Yankees needed runs in a […] 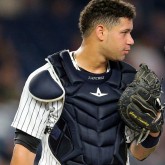 NEW YORK — The Yankees’ youth movement is in full-swing. Before Wednesday’s game against the Blue Jays, manager Joe Girardi dropped a pair of hints that young Gary Sanchez will take over for Brian McCann as the team’s everyday catcher going forward. It’s a role he’s essentially held for a week or two now, but no […]