Apologies for the delay since my previous post at the end of the regular season. Since then, the real-life Yankees toppled Oakland in the Wild Card game but fell disappointingly to the Red Sox in the first round. Could the alternate universe Yankees fare better? Well, as you can see by the title of this post, the answer is no. After taking a look at the summary of the series, I’ve also provided full season stats for the Yankees hitters and pitchers, along with sortable league stats. Finally, there are the postseason results and end of season rewards.

Twice, the Yankees’ offense provided the Yankees’ pitching with leads. Both times, the leads were blown. Miguel Andujar’s two-run homer against Justin Verlander in the third inning provided Luis Severino with a 2-0 advantage, but Houston leveled the score an inning later. Carlos Correa drilled a solo shot to tie it, Yuli Gurriel reached on an error, and Josh Reddick drove in Gurriel with a single. In the top of the fifth, Didi Gregorius launched a solo homer against Verlander to regain the lead, 3-2. Severino pitched a clean fifth, handing it off to the bullpen to finish the game. The plan was to go from Tommy Kahnle to Brad Hand to David Robertson to Aroldis Chapman. Kahnle pitched a clean sixth but ran into trouble in the seventh. After back-to-back walks to start the inning, Brad Hand was summoned to face Brian McCann for the left-on-left matchup. Unfortunately, McCann drilled a game-tying double, leaving runners on second and third with still no one out. Hand luckily escaped with the game tied, but the damage was done. Meanwhile, the Yankees had no answer for the Houston bullpen, leading to Robertson entering the game with it still tied at three in the eighth. It only took three batters for Houston to take a 4-3 lead: Correa doubled, Gurriel singled, and Josh Reddick hit a sacrifice fly. Robertson didn’t allow anything else. In the ninth, Greg Bird’s one-out single was the only action for the Bombers; a combination of Ken Giles and Brad Ziegler finished the game to give the Astros a 1-0 series advantage.

When a game’s starters are Madison Bumgarner and Dallas Keuchel, one doesn’t expect eight home runs to be hit between the two teams. Yet, this one turned out to be a seesaw slugfest that went down to the wire. The Yankees jumped ahead early, 2-0, thanks to a bases-loaded walk by Aaron Hicks and a solo home run by Gary Sanchez. Bumgarner was cruising through three innings, but ran into trouble in the fourth, though it wasn’t all his doing. Miguel Andujar booted a grounder that let Yuli Gurriel reach base with one out. Bumgarner fanned the next batter, Josh Reddick, but extended the inning by walking Marwin Gonzalez. Up came Brian McCann, and out went the baseball for a three-run jack, putting Houston on top, 3-2. That lead was short-lived, as Sanchez went yard again in the fifth to tie it up. Did I mention that there were eight homers hit in this game? In the bottom of the fifth, George Springer broke the tie with a solo dinger of his own. In the Yankees next turn at bat, the seesaw swung back in their favor for good: Didi Gregorius launched a two-run home run against Joe Smith to put the Yankees in the lead, 5-4. Bumgarner finished a clean sixth inning, setting up the bullpen to hold this one down. Giancarlo Stanton added an insurance run with a solo homer against Chris Devenski in the seventh. After that, it was Dellin Betances for a clean seventh inning before handing the ball to Aroldis Chapman for a two-inning save. Fortunately, Aaron Judge added one more insurance run with a solo shot in the top of the ninth, because Chapman started running out of gas. Marwin Gonzalez led off the ninth with a single, and two batters later, Alex Bregman blasted a two-run bomb to cut the Yankees lead to one. Carlos Correa then flew out to the warning track – exhale – and George Springer grounded out to end the game. Series level, 1-1. Back to the Bronx we go.

The story of game three was the battle of the bullpens. Masahiro Tanaka was pulled with nobody out in the third, with the Yankees down 3-2, forcing Jonathan Holder to escape from a jam unscathed. On the other side, Lance McCullers got off to a rough start, settled down for a few innings, but then fell apart in the fifth. Giancarlo Stanton’s two-run homer in the first was the early damage, and Gary Sanchez’s three-run dinger in the fifth was the knockout blow. At that time, it was 5-4 Yankees with a fresh bullpen after a day off to hold things down. Later, Aaron Hicks made it 6-4 in seventh on a solo home run, giving the bullpen more cushion. Tommy Kahnle threw a scoreless seventh, setting it up for David Robertson and Aroldis Chapman to close it out. Robertson wasn’t up to the task; he ceded the ball to Brad Hand after three batters, exiting with runners on first and second with no one out. Hand entered against Derek Fisher and struck him out. Two down. Up came Carlos Correa, who singled to load the bases. Yuli Gurriel walked on four pitches to make the score 6-5. Josh Reddick drove in two more runs on a single to give the Astros a one-run lead, which knocked Hand out of the game. Dellin Betances cleaned up the mess, but the damage was done. Ken Giles blanked the Yankees in the eighth and Brad Ziegler shut the door in the ninth to put the Astros at a 2-1 series advantage.

For the second straight season, the Yankees were eliminated by the Astros. Justin Verlander was the team’s kryptonite as the bats went silent, scoring just one run. Meanwhile, Sonny Gray lasted just one inning and allowed two runs, which was all Houston needed. Luis Severino came on in relief and kept the Yankees in the game, throwing four and two-thirds innings of two-run ball. After Verlander, Ken Giles delivered a two-inning save, striking out four and allowing just one baserunner. And that is how the OOTP Yankees’ season ends.

A disappointing ending to the season for sure, but there’s not much shame in losing to a team as good as the Astros. Before we get to the playoff results, here are the regular season statistics: 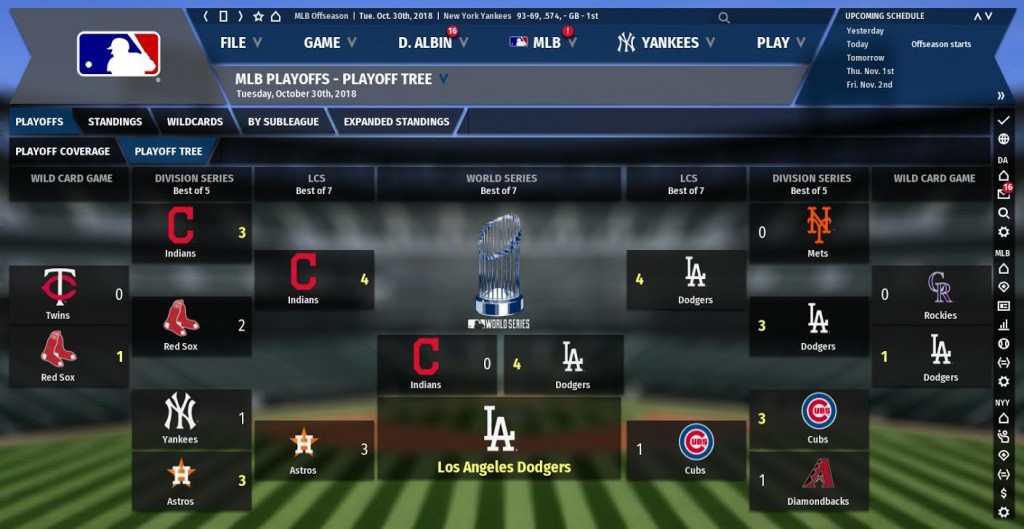 Here are the players who took home virtual hardware, including one Yankees pitcher…