The final week of the regular season has arrived! With just seven games left on the slate, a two and a half game difference between the Yankees and Red Sox, and the rivals facing off against each other at Fenway to end the season, blood pressures are sure to be high.

It took extra innings, but the virtual Yanks started off the week with a win in Tampa Bay, beating the Rays 4-3 in extras. Tyler Austin was the offensive hero, blasting the go-ahead homer against Brian Miller. Extra inning affairs are always tough on the bullpen – but this one was especially so. Sonny Gray only recorded eleven outs, forcing the ‘pen into action early. Adam Warren, Dellin Betances, David Robertson, Tommy Kahnle, Brad Hand, Jonathan Holder, and Aroldis Chapman all pitched. On the bright side, Boston lost to the Orioles, putting the Yankees even closer to clinching. With a four game edge in the loss column and six games remaining, the Yankees could clinch before going to Fenway at the end of the week.

Just a day after reaching deep into the bullpen, Jordan Montgomery pitched deep into the game. He was excellent in seven and two-thirds; he didn’t allow a run and struck out six. Meanwhile, the offense was dormant, getting only two hits and one run all game, but it was enough. Aroldis Chapman notched the save for a 1-0 victory. The Red Sox fell to Baltimore yet again, dropping the Yankees’ magic number to one. Doesn’t look like the season finale series in Boston will mean anything.

Pop the champagne! The only better way to clinch would have been in Boston, but who can complain as division champs? An easy 7-0 win with a dominant Madison Bumgarner on the hill sealed the AL East’s fate. Bumgarner contributed eight shutout frames and the offense delivered a stellar all-around performance.

A chance to spoil Boston’s season

The only thing the Yankees had to play for was the American League’s second-best record, which though important for home-field advantage in the division series, it’s not quite as much as what Boston had on the line. Entering the series, here’s what the Wild Card race looks like:

Four teams, two playoff spots, and only three games separating them. All but Oakland were guaranteed to still be alive by game 161. If the Yankees could beat up on Boston, there was a chance to eliminate them from postseason play entirely.

To start, things looked good. The Yankees scored four runs in the first inning, including a three-run homer by Giancarlo Stanton (his 55th). Plus, CC Sabathia was great until the sixth inning, which was when the wheels came off. Up 4-0 at the time, Sabathia gave up five runs in the inning, though he was an out away from finishing up 4-2 when Jackie Bradley Jr. hit a three-run homer. Boston never looked back and eventually won, 7-5. Seattle and Minnesota won to keep pace, while Oakland lost and was eliminated from Wild Card contention.

Game two also was looking good, but the bullpen blew it in this one. Luis Severino pitched well into the seventh inning and exited up 3-2. Brad Hand finished that inning and started the eighth, which is when the trouble began. Hand coughed up two runs, one of them inherited by David Robertson. Up 4-3, Craig Kimbrel came in to close it out and notch Boston a playoff spot. The win guaranteed Boston at least a tie for a Wild Card spot, as Seattle and Minnesota won again. In fact, there’s a chance for there to be a three-way tie for the two available Wild Card spots!

Boston was determined to avoid a three-way tie, as they clobbered the Yankees in the season finale. Sonny Gray threw a stinker, giving up six runs in three innings, and Domingo German was no good to boot. He surrendered four more runs and Boston was victorious, 10-2. Minnesota won and Seattle lost, so we don’t even get a tie for the second Wild Card spot.

Here’s a summary of all things parallel universe Yankees: 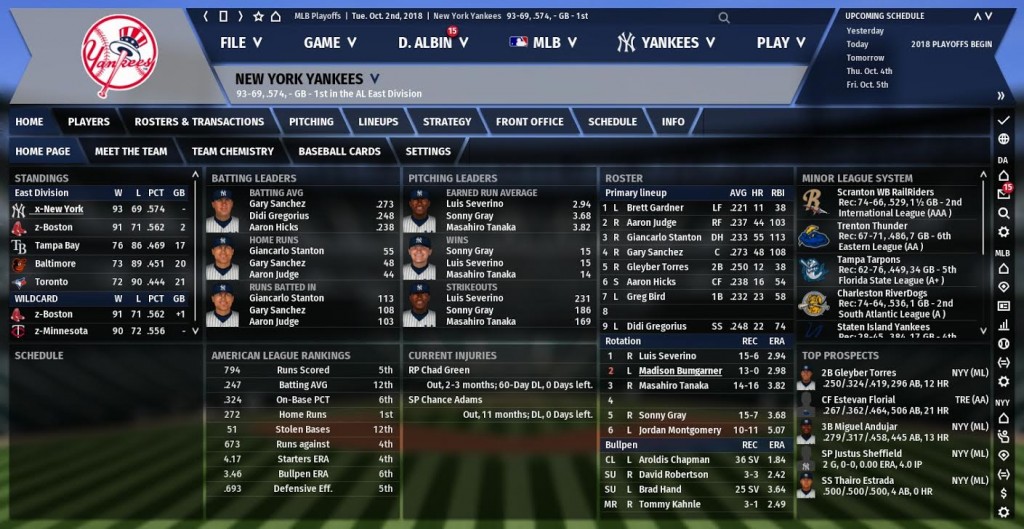 So much for a nail biting finish to the season. Though it had once appeared that the Red Sox and Yankees could have been fighting for the division title through the season’s finale series at Fenway, the Yankees didn’t oblige. Instead, they swept a four game set against the Rays, and in the process, knocked out the Red Sox from AL East contention. Even though some of the spice was removed from the final series of the season, the Yankees did have a chance to knock out Boston from the playoffs entirely given the tight Wild Card race. Unfortunately, Boston swept the Yanks to seal their postseason berth.