It might have been fair to start really worrying after Boston cut the division lead to a mere half game last week. With a west coast trip on the docket and lackluster recent performance, things weren’t so good in Yankeeland. Fortunately, this week brings the return of the team’s co-ace, Madison Bumgarner.

As we’ve seen earlier in this season, the OOTP universe likes to schedule home-and-away doubleheaders located at the same stadium to accommodate rainouts. So, to start the series in Oakland, the Yankees were the home team for the afternoon game and the road team in the nightcap. The A’s are in the playoff hunt, just two games behind the Red Sox and Twins for a Wild Card spot (both Boston and Minnesota hold the two spots), meaning that they also aren’t far behind the Yankees. Pretty pivotal series for the Yankees to fend off another team on its heels. Oh, and here comes a weird doubleheader to make it even more interesting.

Bizarre home game notwithstanding, game one was a pretty simple and ho-hum victory thanks to solid pitching. Masahiro Tanaka pitched deep into the game, falling one out short of finishing seven frames while holding Oakland scoreless. Tanaka handed the ball to Tommy Kahnle with a 3-0 lead, which Kahnle maintained when he exited in the middle of the eighth. Kahnle did leave a couple of runners on, both of which came in to score against David Robertson. Brad Hand had to bail out Robertson, but the Yanks managed to escape and tack on an insurance run in the bottom half of the frame. In the ninth, Aroldis Chapman struck out the side to seal the 4-2 win.

The second game of the doubleheader was a piece of cake. CC Sabathia followed up Tanaka’s brilliance with a strong outing of his own. Over seven innings, CC allowed two runs and exited up 6-2. The offense did most of its damage in the fifth, scoring five runs, capped by a Gleyber Torres RBI triple. Dellin Betances relieved Sabathia and pitched two scoreless innings to finish the game. Giancarlo Stanton hit his 42nd homer to tack on an insurance run, making the final score 7-2. With the sweep of the doubleheader, the Yanks gained one game on the Red Sox, who split a doubleheader against the Braves.

Sonny Gray kept the line moving in game three. He allowed two runs in six and a third before giving way to the bullpen. The Yankees scored six runs, all but one coming via a homer. Both Aaron Judge (38, 39) and Giancarlo Stanton (43, 44) hit two homers apiece to lead the way. With a 6-2 lead, the Yankees took a chance by using Luis Cessa in the ninth in order to save the bullpen (Adam Warren covered the previous inning and two thirds), but Cessa struggled. He gave way to Chapman, who shut the door, though he did allow two of Cessa’s baserunners to score, making it a 6-4 final. Boston won again, so no ground was gained.

Get the brooms out! The Yankees took care of business in the fourth and final game of the series, winning by the same score as the previous day: 6-4. Aaron Judge blasted his 40th bomb and Miguel Andujar hit his 12th (he’s also hitting .289/.332/.485). Jordan Montgomery was decent, giving up three over five innings, but the bullpen was stellar. Jonathan Holder pitched two scoreless innings, David Robertson allowed one run in the eighth, and Tommy Kahnle closed it out to give the tired Chapman a breather. Boston won as well, taking down Atlanta to maintain pace with the Yankees.

Before starting the next series in Seattle, the Yankees received a much deserved day off after playing four games in three days in Oakland. Thanks to the Yankees’ dominance against the A’s, the Mariners were able to ascend the standings and creep within two and a half games of a Wild Card spot (still held by both the Red Sox and Twins). Again, this makes it a pretty important series for the Yankees.

Maybe the off day threw off the team’s momentum because Seattle shut down the Yankees in the opener. The offense mustered just one unearned run against Erasmo Ramirez and nothing against the bullpen. Luis Severino was solid, but solid wasn’t enough without some run support. He allowed three runs in six and a third, and the Yanks eventually lost 4-1. In lockstep, Boston fell to the Astros, so no harm no foul.

Game two brought the return of Madison Bumgarner from the disabled list, finally. He was triumphant, throwing seven easy innings, with his only blemish a two-run homer hit by Kyle Seager in the first inning. MadBum was probably just shaking off the rust. The bats gave plenty of run support, scoring eight times in the 8-4 win. Giancarlo Stanton delivered two more dingers, bringing his season total up to 46. Only Matt Olson, with 47, has more. What’s better is that Boston lost again, giving the Yankees a two and a half game division lead.

The rubber game was a laugher and a great way to finish the week. The game was pretty much over after three innings because of a six-spot the offense hung on Andrew Moore. That inning included a two-run Greg Bird homer (his 20th) and a three-run Gary Sanchez homer (his 38th). Masahiro Tanaka threw seven shutout innings and Domingo German delivered two perfect frames to finish a 10-0 win. With Boston beating Houston, the division lead remained at two and a half to close the week. 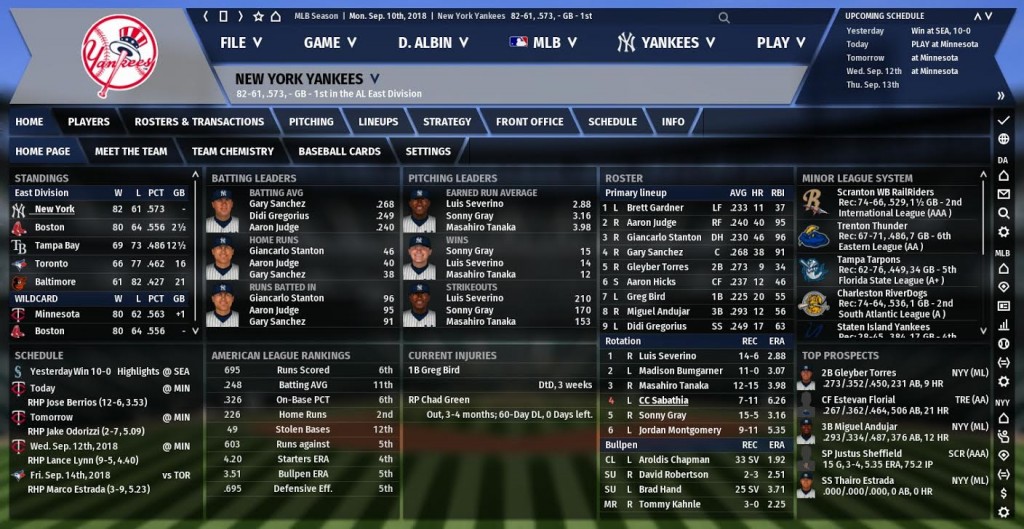 There’s nothing like a west coast trip to turn things around, right? Apparently yes in this universe, though those road trips late in the season aren’t usually a welcome thing after a long year. The Yankees persevered to win six of seven games this week and gain two in the standings on Boston in the process. To start the week, the Yankees swept four games in Oakland while the offense 23 runs. Over the weekend, they took two of three from Seattle, with the middle game including Madison Bumgarner’s return. He was excellent in seven innings, which is promising for the final couple of weeks in order to hang on to the division.