September is here and that means the final and deciding stretch of the divisional race is underway. Though the real-life Yankees seem just about buried and will have to settle for the wild card, the parallel universe Yankees are the cream of the crop in the AL East, though not by much. Last week, the virtual club struggled but maintained its tight lead over Boston. With the White Sox and Tigers on the slate this week, it was a perfect opportunity to maintain and perhaps build up some cushion.

Worst team in baseball comes to the Bronx

At 45-86, the White Sox are the worst team in baseball in this universe, making it of the utmost importance for the Yankees to take care of business. In game one, they did just that. Starter Jordan Montgomery wasn’t great, but the offense and bullpen did an excellent job. The bats plated six runs against Lucas Giolito and the south siders’ bullpen, including home runs hit by Aaron Judge, Greg Bird, and Brett Gardner. On the mound, Montgomery just fell short of completing five innings, allowing two runs while striking out nine. The bullpen pitched four and a third clean frames, though Aroldis Chapman did have to bail out Jonathan Holder with runners on first and second and one out in the ninth. The final score: 6-2. Boston had an off day, so the win increased the Yanks’ division lead to one and a half games.

Luis Severino pitched game two of the series, and though his final line wasn’t good, he did give distance. He threw eight innings and allowed five runs (including three long balls). The offense had his back though, scoring nine runs on twelve hits and six walks. No homers were needed in this one, as instead a well-balanced approach toppled Chicago. All starters reached base, though Gary Sanchez was the only one who went hitless. Boston beat Miami to maintain the pace.

Game three went according to plan and the Yankees completed the sweep. Masahiro Tanaka was brilliant; he struck out eleven in eight innings while allowing just two runs. The offense had a home run derby, blasting seven dingers en route to a 13-2 win. The home run hitters: Aaron Judge (twice, up to 36 on the year), Gary Sanchez (also his 36th), Didi Gregorius (twice, 17 on the season), Miguel Andujar (his 10th), and Brett Gardner (his 11th). Once again, the Red Sox were victorious over the Marlins.

The win streak was upped to four after the series opener against the Tigers. Though CC Sabathia struggled once again, raising his season ERA to 6.47, the bullpen and offense bailed him out. Adam Warren, Tommy Kahnle, David Robertson, and Jonathan Holder threw five shutout frames and the offense scored ten times in the 10-6 win. No home runs for the offense, but they did get on base eighteen times against Daniel Norris and the Tigers’ bullpen. Of course, just like the Yankees had no problem against the White Sox to start the week, Boston had no issue beating Chicago to remain on the Yankees’ tails.

The week’s hot start came to an end in the second game of the Detroit series, despite having a 4-2 lead in the sixth. Sonny Gray, who was pitching well just like he has all season, gave up three runs in the inning, all with two outs. The Yankees clawed back to tie it on a Greg Bird solo homer in the eighth (his second of the game), but couldn’t keep momentum. David Robertson allowed two runs in the ninth inning, pushing the Tigers ahead 7-5. The offense had a last gasp in the ninth when Gary Sanchez led off with a double and Bird walked with two outs, but nothing came across. Fortunately, Boston was blown out by the White Sox.

Jordan Montgomery was left in a bit too long in Saturday’s affair. In trying to get him through the sixth inning with a quality start under his belt, the lefty gave up a three-run homer to Christin Stewart which put the Yankees behind 6-1. The offense — Greg Bird to be precise — valiantly tried to get back into this game. Bird hit a two-run homer in the sixth inning and did the same in the eighth, but without any help, the Yanks fell short 6-5. The good news: Boston lost again.

Luis Severino to the rescue and to salvage a split, right? Wrong. Sevy didn’t have it and was knocked out before he could finish the fifth frame. Though he struck out nine, he also allowed six runs on ten hits. The offense picked him up with a barrage of home runs, including one by Aaron Judge (37) and two by Giancarlo Stanton (40, 41), which helped give the Yankees a 7-6 lead entering the eighth inning. With the bullpen a bit worn out, Jonathan Holder was tasked with handling the inning before going to Aroldis Chapman. Holder only recorded one out and exited with runners on second and third. In came Chapman for a five out save, but he struggled too. James McCann drilled a two-run single to take an 8-7 lead, and the Tigers tacked on one more before it was all said and done to win 9-7. It was just Chapman’s second blown save in 33 opportunities. Over in Chicago, it was only a matter of time until the Red Sox would break through for a win. With a victory, they cut the Yankees division lead to a half-game (one in the loss column) to end the week. 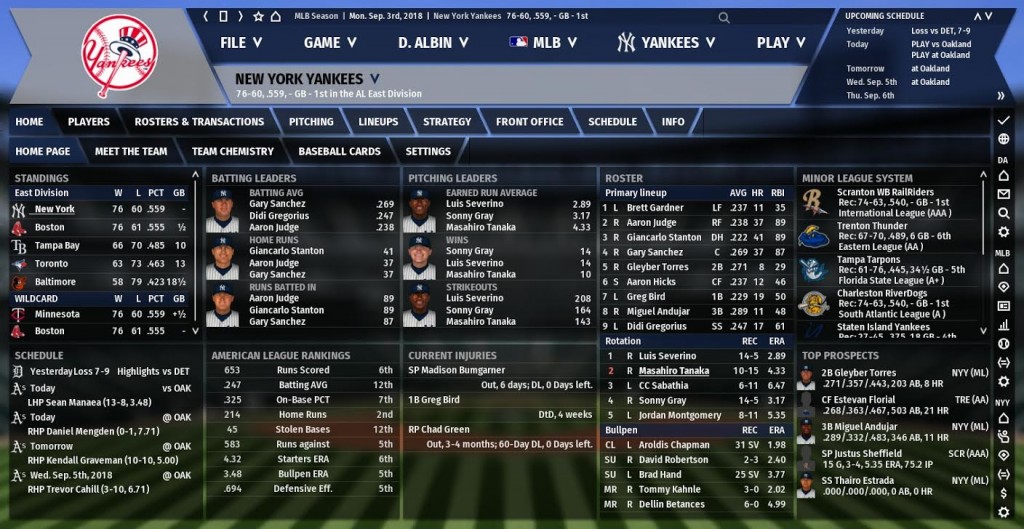 It seems like every time this team is about to go on a run, things grind to a halt. That happened again this week, when the Yankees swept a three game series against the White Sox and were set up to do damage against a poor Tigers team over a four game weekend set. The first game of the Detroit series went well with a victory, but that’s where the good times came to an end. The Tigers won each of the last three games to close out the week. From a glass half full perspective: another week has gone by with the division lead in tact. Even though the Red Sox went 4-2, they split against the terrible White Sox club that the Yankees had just swept. Truth be told, it was a blown opportunity for them to get a leg up.