It’s nail-biting time in the OOTP universe. After last week, the Red Sox were breathing down the Yankees’ necks, sitting just a half game behind the Bombers. As you may recall, Boston was six games off the pace just a few weeks ago. There’s no more time to mess around now, as one bad week could put the Yankees at risk of playing in the Wild Card affair, or even worse: it could put them out of the postseason picture entirely. Both Twins and Mariners possess the top two Wild Card positions, meaning that the loser of the east division doesn’t necessarily have a safety net.

Sweeping away the Rays

After a day off on Monday, the Yankees welcomed the Rays to Yankee Stadium. Though, it wasn’t such an inviting welcome because of Sonny Gray’s brilliance. The righty threw seven and two-thirds shutout innings, striking out ten while allowing just three baserunners. His ERA is now down to 3.19, a long ways away from what he’s done in real life. Oh well. Aaron Judge did most of the damage on offense, driving in three runs, two coming on a home run off Matt Andriese in the fifth. The Yankees scored one more run earlier in the game on a Miguel Andujar solo shot. The final: 4-0 Yanks. It was an important win considering Boston blew the doors off the Phillies to remain a half-game behind the Bombers.

The Yankees found themselves in an uphill battle in game two, down 2-0 to Chris Archer after three innings and 3-1 before their turn to hit in the fifth. Jordan Montgomery wasn’t great, throwing five innings and allowing all three of those runs, but at least he kept the game close. Greg Bird broke through for a solo shot in the fifth and Didi Gregorius tied it with one of his four base hits in the sixth. With Archer out of the game following six frames, this one became a battle of the bullpens, though it proved to be Tampa Bay’s defense that was its undoing. With two outs and runners on first and second in the eighth, Miguel Andujar hit what should have been an inning-ending groundout to short. However, Brad Miller dropped the throw from Hechavarria at second, and Didi Gregorius scurried home to take a 4-3 lead. Aroldis Chapman shut the door with a clean ninth. Boston once again beat Philly to maintain the thin gap at the top of the division.

In game three, the Yankees were in an early hole once again. Luis Severino allowed a two-run home run to Denard Span in the first inning, but that was all he allowed. He didn’t allow another run for the rest of his outing, allowing the Bombers to get back in this one. Giancarlo Stanton hit a solo home run off Anthony Banda, Stanton’s 36th, to cut the lead to 2-1 in the fourth. In the seventh, Gary Sanchez’s 33rd dinger (also against Banda) gave the Yanks a 3-2 lead. Severino gave the ball to Brad Hand for the eighth, but Hand coughed up the lead as the Rays rallied to tie the game. After holding the Yankees scoreless in the eighth, the Rays had no answer for Aroldis Chapman in the ninth, setting up potential extra innings if the Yankees couldn’t score in the bottom half. The Yankees wound up not needing the tenth inning because Miguel Andujar blasted a two-run walk-off homer against Alex Colome to win it and complete the sweep. With Boston off, the win put the Yankees up one game in the division.

Masahiro Tanaka struggled mightily in the series opener vs. Toronto, but Tommy Kahnle bailed him out from a really ugly final pitching line. Tanaka was pulled in the fifth inning with the bases loaded and nobody out with the Bombers ahead 5-3, but Kahnle managed to strikeout Randall Grichuk and induced an inning-ending double play from Russell Martin. Despite the escape, this one was far from over. Adam Warren wound up blowing the lead in the seventh when Troy Tulowitzki hit a two-run dinger to level the score. Then, when the Yankees pushed two runs across to regain the lead in the bottom half, Dellin Betances coughed it up in the eighth, making it 7-7. Giancarlo Stanton finally put the Yankees ahead for good, hitting his second home run of the game in the eighth against Brett Cecil, putting the Yankees ahead 8-7. With a rather tired bullpen, Jonathan Holder was given the call to close this one out, and he did just that. And what did Boston do? They won, of course.

Ultimately, the Yankees weren’t going to win out. They finally fell in the second game of the series as Toronto blasted four home runs against CC Sabathia and Adam Warren. There’s not much more to add about this one, as the Yanks fell 11-6. At least Boston lost! They can’t win them all either, you know.

The week ended much like the week began: another Sonny Gray gem. To take the rubber game, Gray dealt seven innings, struck out eight, and gave up only one run. Aaron Hicks and Greg Bird supplied the offense, with a solo dinger and two-run shot, respectively. David Robertson and Aroldis Chapman nailed down the final six outs, making the final score 3-1. One other note of significance from this one: Aaron Judge was ejected for arguing balls and strikes in the fifth inning. Apparently, his antics were so inappropriate that the league suspended him for two games. Virtual Aaron Judge certainly doesn’t seem like the calm guy we’re accustomed to in reality. On the plus side, Boston lost again to Tampa Bay, meaning that the Yankees finished the week two games ahead of Boston. Finally, some ground regained.

Real Universe Yankees: 78-46 (second place, nine and a half games behind Boston) 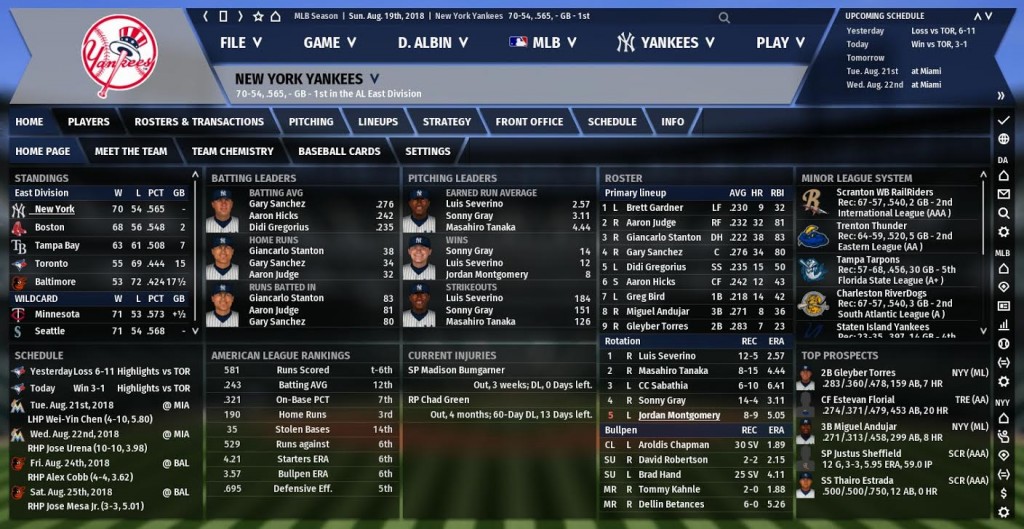 As needed, the virtual Yankees took care of business against lesser opponents this week. They swept Tampa Bay and took two out of three from Toronto, all the while increasing their division lead over Boston from a half game to two games. The Red Sox finally cooled down a bit, dropping two games at the end of the week to the Rays. Though the division lead certainly isn’t as cushy as the six-game advantage that was held just a couple of weeks ago, it certainly feels much better to have a couple of games of distance between the two clubs. One other highlight of the week to note: Aaron Judge was suspended for two games because of his conduct when arguing balls and strikes in the last game of the Toronto series.

Win or lose this year, there will be decisions made on multiple players. Below is Brian Cash-Ninja’s Blue Print for long term sucess that I was able to take a peak at during my last visit with B-Ninja:

1-First off, Walker will not be on next years team.

2- Gardner should not take a spot from Clint Frazier of a free agent signing, bench role or nothing.

3- Next, what to do with Sonny Gray, Gregory Bird, and Gary Sanchez?

5- What free agents will we target?

TheAnswers to those Tough Questions:

1- I would sign CC and Happ on 1 year contracts only based on their respective ages. If Happ can get more then let him go.

2- I would then trade Sonny Gray and Gregory “Stanford” Bird to Colorado (Bird’s backyard) for Jon (Snow) Grey!

3- I would sign Patty Corbin and go with a 6 man rotation.

Corbin, Severino, CC, Jon Grey, Happ, Tanaka, and Sheffield will be the 7th arm and with injuries at one point him and Montgomery (after all star break) will be available to fill out rotation.

4-I would sign either Andrew Miller or Zack Britton.

5-I would allow Acevedo, Adams, and Kahn battle for a bullpen spot.

Roster (Sanchez, Realmuto, Harper, Torres, Didi, Andujar, Hicks, Judge, Stanton, Frazier, Wade, I would use the 25th roster spot for either Gardner/Torreyes/ or a guy who can catch and can play 1st?): 12

6- I would consider Gary Sanchez in a 1st base platoon and as back up catcher to get him 500 plus at bats. Our roster will be much deeper this way.

7- I would sign either Harper for left field and platoon him occasionally with Gary at 1st or Machado for 3rd and platoon Andujar at 1st, left field, and 3rd.

9- Wade and Frazier will fill out roster and bench spots.

10- Depending on how we finish I would consider bringing in a more experienced manager such as Buck Showalter.

This should be Cashman’s blue print for the next dynasty.