Everyone loves a good division race, right? I sure would like to have one in real life right now, but that doesn’t seem to be the case. After last week, the alternate universe Yankees were up four games in the division (and six just two weeks ago). After this week, it looks like an exciting race for the division title is in the works. Hey, if the virtual Red Sox can make up six games in just two weeks…why can’t the real Yankees closer before September ends? Meh. Let’s stay on point here and explain how the parallel world Yankees faltered this week:

A good start to the week against the White Sox

The series opener in the south side was over pretty early. After a three-run rally in the second inning to give Masahiro Tanaka an early lead, Aaron Hicks blew this game open with a three-run homer in the fourth to make it 6-0. The offense tacked on a couple of more runs while Tanaka pitched seven strong innings (three runs allowed) for the victory. The final was 8-3 in favor of New York.

Following the game, CC Sabathia was activated from the disabled list and Domingo German was optioned. Sabathia, set to start the second game, owns an ugly 6.12 ERA (mainly because of a brutal April) and appears to be the odd man out of the rotation once Bumgarner returns. CC’s return wasn’t great; he left the game with the bases loaded and one out in the fifth, though with a 4-2 lead intact. Tommy Kahnle escaped that jam by allowing just one inherited runner to score. From there, the bullpen did the job. In addition to Kahnle, Brad Hand, David Robertson, and Aroldis Chapman combined to throw four and two-thirds innings of one-run ball. The final score was 6-4 Yankees. One minor injury note: Aaron Hicks left the game with back spasms and is day-to-day. Curtis Granderson filled in for him and hit his first home run back in pinstripes.

There wouldn’t be a sweep, as James Shields decided to turn back the clock and twirl a vintage performance. Over six and a third he allowed just one run and fanned nine batters. Sonny Gray was brilliant himself, striking out ten in seven innings of work, though he allowed three runs (one earned). The offense just couldn’t get it going against Shields and the ChiSox bullpen, falling short 3-2.

A terrible finish to the week against the Rangers

It didn’t feel like home sweet home when the Yankees returned to the Bronx to play the Rangers. Texas trampled the Yankees 10-2 in the first of a four-game series. Jordan Montgomery got knocked around, allowing seven runs, which raised his ERA above 5. Meanwhile, Curtis Granderson, who’s stepping in for Aaron Hicks for a couple of days, had to exit after being hit by a pitch in the ankle. Fortunately, it was deemed nothing more than a bruise so he should return shortly.

Luis Severino was lined up for game two, and he did not disappoint. Though he allowed a first-inning run, he didn’t look back once Giancarlo Stanton gave the Yanks a 3-1 lead in the third thanks to his 35th dinger (this one a three-run blast) of the year. Severino finished with eight strikeouts in six and two-thirds, with the one aforementioned run allowed. After Sevy, Tommy Kahnle and Adam Warren held down the 6-1 win.

In Saturday’s third game of the set, Masahiro Tanaka struggled. He allowed seven runs, including Yoenis Cespedes’s three-run homer, across seven innings. Dellin Betances and Adam Warren chipped in three more runs to the Rangers’ effort. The offense didn’t have much of an answer for Texas’s pitching and lost 10-3.

Salvaging a series split wasn’t in the cards. Much like his first start of the week, CC Sabathia failed to provide distance and struggled. He exited in the fourth with nobody out and the score in the Rangers favor, 6-2. On the other side, Mike Minor was stellar and stifled the Yankees’ bats in six innings. Curtis Granderson was responsible for the only two runs of the game for the Bombers when he hit a two-run shot against Minor in the third. John Fasola and Alex Claudio held down the Yankees’ offense in relief to take the game 7-2 and the series 3-1.

In a week where the virtual Yanks went 3-4, the Red Sox went 6-0. That cushy division lead of six games from two weeks ago is no more, with the Yankees just a half-game ahead of the surging Red Sox.

Real Universe Yankees: 74-43 (second place, nine and a half games behind Boston) 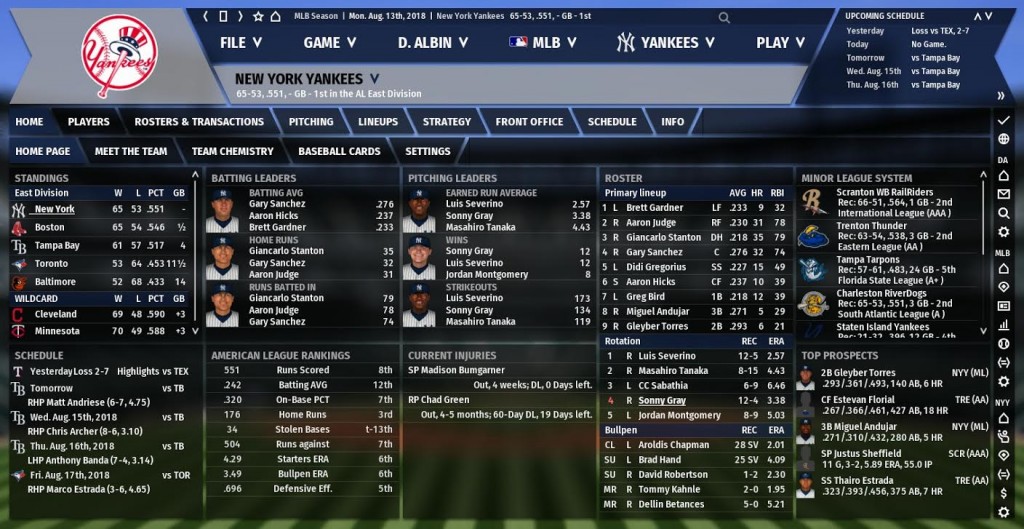 After being four games up to start the week and six games ahead two weeks ago, the Red Sox made up almost all of that ground this week. Despite the Yankees taking two of three from the White Sox, they dropped three of four at home against the Rangers to close a poor weak. Meanwhile, Boston’s undefeated week brought them to within a half game of the Yankees. The pitching, namely CC Sabathia, Jordan Montgomery, and Masahiro Tanaka, all had lousy pitching performances which cost the team games. With only Luis Severino and Sonny Gray pitching well, and Madison Bumgarner injured, the bats might need to carry the team for the next few weeks. It didn’t appear we would get to this point, but now the division race is officially on.