No team throws fewer fastballs than the Yankees, and it’s not particularly close. No team throws a harder average fastball than the Yankees, either. I’m not breaking any new ground here, as this has been written about in many places, including Fangraphs and Sports Illustrated. I’ve even touched upon it as it relates to Sonny Gray. What’s my point? If a commoner like me is well aware of the team’s pitching philosophy, surely the other 29 major league teams know about it. That means those 29 clubs have had time to adjust.

The graph below is indicative of how the Yankees and their opponents have adjusted as this season has played out. 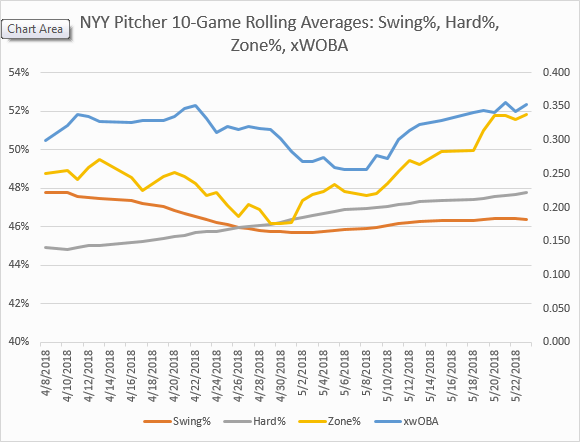 Yankees pitchers have gradually thrown more fastballs. Unsurprisingly, with more fastballs have come more pitches in the strike zone, as it’s easier to locate a pitch with less movement. At the same time, opposing hitters have gradually swung less often until essentially leveling out come May. Expected wOBA dipped in early May, but has been fairly steady otherwise.

It’s interesting that the Yankees have ramped up fastball usage as the season has gone on. That’s not to say that the staff has ditched its anti-fastball mantra, as it’s still throwing non-fastballs more often than not. I don’t anticipate that the Yankees will become a fastball loving team anytime soon, either. It just so happens that adjustments were made for one reason or another.

I suspect that one reason for the increase in hard pitches was in reaction to or in anticipation of opposing hitters swinging less often. Clearly, opponents’ swing rate went down which may have forced the Yankees to throw more heat. Or, they expected the opposition to swing less often, so the plan always was to gradually throw more fastballs in order to steal strikes. Perhaps that plan hasn’t been perfect in execution, as we haven’t seen the Yankees’ zone percentage jump in recently, but it makes sense in theory.

One other possibility is that this organizational philosophy simply doesn’t work as a one size fits all approach. A perfect example of this is Sonny Gray, who threw a ton of breaking balls in his first few starts as I noted last month. Sheryl Ring touched upon this subject too. Gray’s fastball/sinker usage has seen a bump since the middle of April, which makes sense. When he was excellent in Oakland, he predominantly relied on his hard pitches. The Yankees tried to unlock something more in Gray with the increase in breaking ball usage, but it just hasn’t worked out. I suppose it was worth a shot, but hopefully, he can regain his previous form.

Now that we’ve seen opponent’s swing percentage roughly stabilize and an increase in expected wOBA over the last few weeks, I wonder if the Yankees will have a response soon. To date, the steady increase of hard pitches hasn’t tapered off for the Yankees, so perhaps an adjustment is in order. After all, we have seen the pitching staff get knocked around a bit lately.

Given that the entire baseball universe is aware that the Yankees want to avoid the fastball to the extent possible, this cat and mouse game should go on all summer. To this stage, the Yankees have slightly backed away from its pitching credo, though not to the point where hard pitches are now a majority of the team’s offerings. Take this as a positive, as the organization isn’t married to this pitching style and is willing to adjust when necessary. That being said, I wouldn’t expect hard pitch usage to continue trending upward as I don’t think the team has suddenly eschewed its beliefs. The Yankees’ pitching staff needs to improve, and although it seems likely that an external solution will be sought by the trade deadline, it’s good to see changes being made on the fly.

I am 75 years old and have been a Yankee fan since I was 8 years old. Let’s face it the yankees pitching sucks, We did not need Staton, we should of went out and got Verlander and Cole. Baseball is pitching pitching pitching and until the Yankees go out and get No 1 starters they are never going win this year or in the future. Cashman blew when he went and got gray he gave up 4 good prospects for a middle of the line pitcher. The Yankees will so far but they will never be in the realm of the Astros, Redsox, unless they change their pitchers. They flat out suck, Dr H and Mister H you can not count on any of the pictures , starters, relievers they all suck. Cashman spend the money on pitching, You did not need staton or Gray.