Masahiro Tanaka has a home run problem. This isn’t news to Yankee fans who have watched the right-hander since 2014 but it seems to get worse every season.

On Monday night against the Texas Rangers, Tanaka surrendered two home runs to bring his season total, thus far, to 11. He has given up five in his last three starts. He gave up one in the rain-shortened game last week against the Nationals, and two against the Red Sox on May 9. Tanaka only has two starts without giving up a home run; April 23 in a 14-1 win against Minnesota and in the 6-5 victory over Houston on May 3.

Tanaka has made 10 starts and while the Yankees only have two losses in those starts, before Monday’s win against the Rangers, he pitched three straight no-decisions and allowed 10 earned runs. His HR/9 is hovering around last year’s mark and last year, he surrendered 35 long balls, a career-high since coming to the U.S.

Per Baseball Savant, Tanaka relies on six pitches. A slider, splitter, four-seam fastball, sinker, curveball, and a cutter. As you can see, he threw his slider a lot more during the first month of the season. Now he throws both his slider and splitter around 31% of the time. 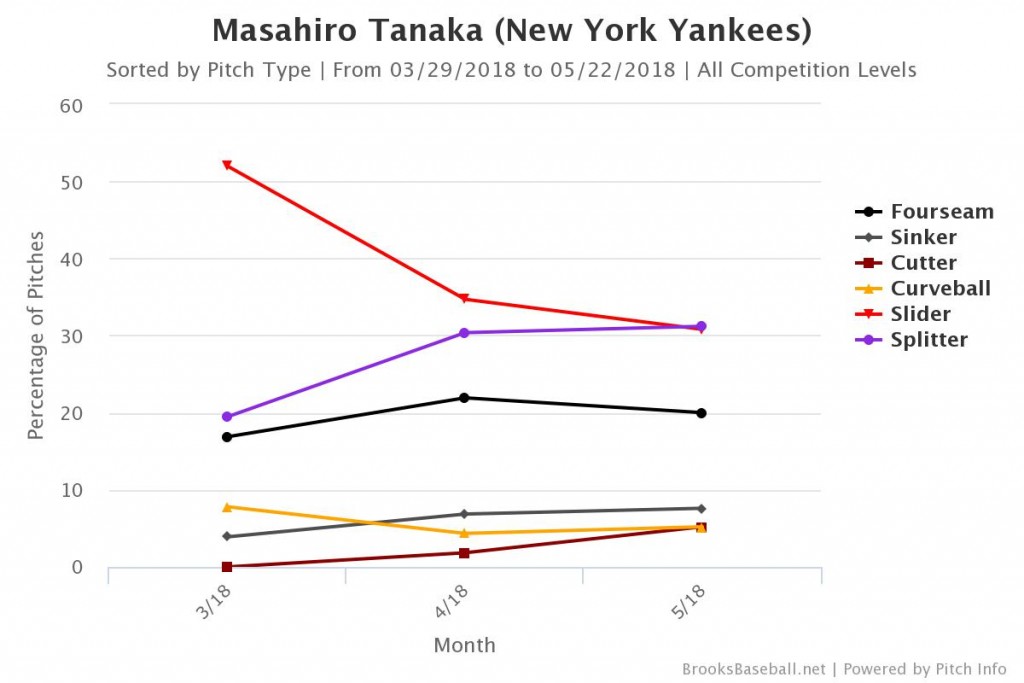 Both home runs on Monday night were off his splitter. On May 9, Mitch Moreland’s home run was off a slider and Andrew Benintendi’s was off a sinker. 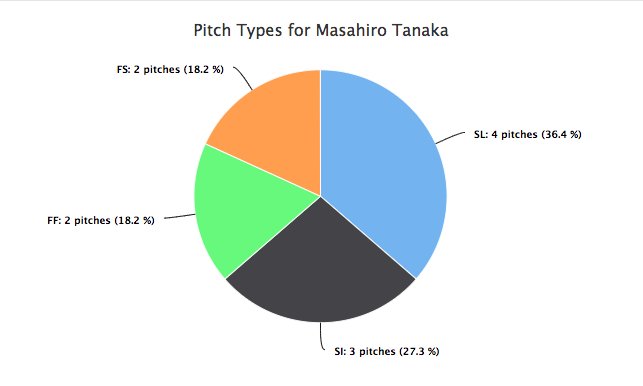 Tanaka’s given up home runs the most with his slider (4), his sinker is next (3) and he’s given up two apiece on his four-seamer and splitter.

Here is where all 11 of Tanaka’s home run pitches landed in the zone. As you can see, six of them were right in the middle of the zone while the other five were just a bit lower but still in the zone. 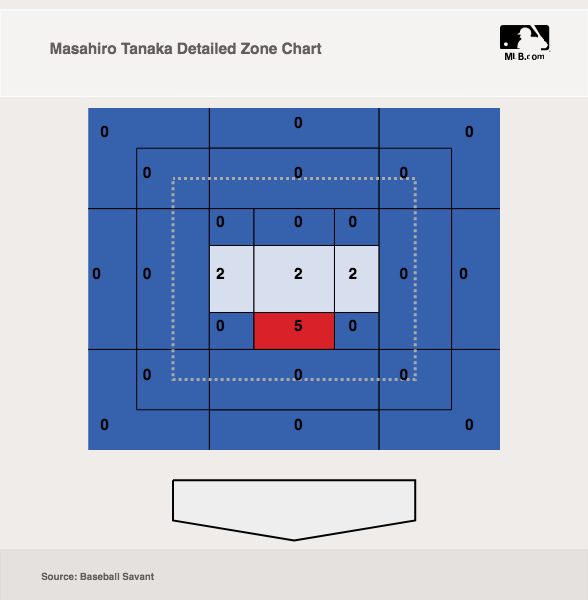 This heat map also shows exactly where Tanaka’s home run pitches landed in the zone. When his four-seamer is flat, his splitter doesn’t drop and when his slider and sinker also don’t move enough, batters are going to hit them well and out of the park. 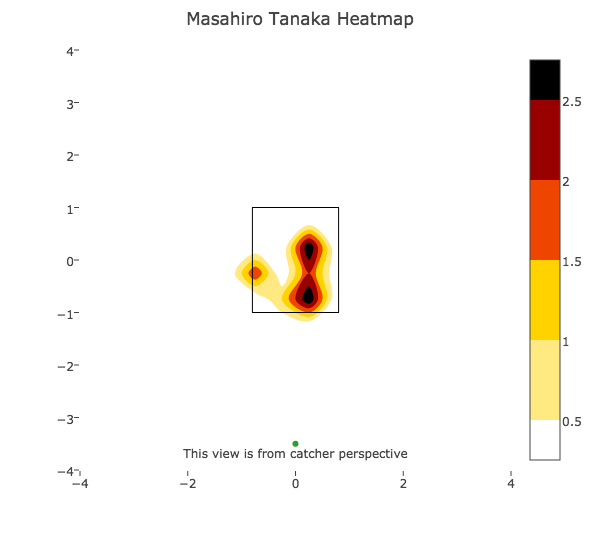 I took a look at where in the count Tanaka’s has given up his 11 home runs and here are the results:

Tanaka has given up three home runs with the batter behind in the count.

He’s given up three with the batter behind in the count.

At least Tanaka’s spreading the wealth, so to speak. I was a little surprised that Tanaka has not (to this point) yielded a home run with two strikes. I guess that’s one positive because nothing is more frustrating to watch than a pitcher getting the batter to two strikes and then giving up a home run.

Last season at this time, Tanaka had given up 14 home runs; even giving up four in a start to the Astros on May 14, 2017. He made 30 starts last season and he had 10 games in which he surrendered multiple home runs and 10 starts in which he escaped unscathed by the long ball. So he’s not on pace to eclipse last year’s total but all he needs is a couple more multi-home run games and he’ll be back on track.

I’m not sure what the solution is or if there even is one. Sometimes you can’t help when your pitches don’t do what you want them to do. If every pitcher could control their pitches all the time, baseball would be kind of boring because strikeouts would go up even more and games would be low-scoring affairs. The bottom line is, Masahiro Tanaka has always been somewhat homer-prone while playing in the Majors and as he ages, it’s getting worse.