For months, we heard from the Yankees that Greg Bird was “untouchable” via trade. On Wednesday, Greg Bird personified that sentiment.

It started as an average day for the 22 year-old. He grabbed coffee and breakfast with his folks. They drove him to the park from the hotel they’re staying at. He got in his pre-game cuts and weight room exercises. Then, things became a bit different.

Bird hit his first two career home runs – both with a runner on – to give the Yankees a 4-3 win over the Twins at Yankee Stadium. The first came in the fourth inning, on a 1-0 changeup high in the zone. The second was a 1-0 fastball down and in. Both scored Carlos Beltran, who saw 11 combined pitches in the two at-bats leading up to Bird’s dingers.

“They were just great at-bats,” said Bird. “Whenever you get a guy up there who’s making the pitcher work, draws a walk, or gets on base, it puts more pressure on him. Lucky enough, he made a mistake after and I was able to capitalize on that. Hats off to him for those great at-bats in front of me. Those were terrific.”

The 4-5 combination of Beltran and Bird in the Yankees order Wednesday is symbolic of the way Bird, who only graduated High School four years ago, fits in with this veteran bunch of players. Just like Beltran, or Rodriguez, or Headley, or Ellsbury, Greg Bird has a steady approach at the plate.

“It was a short-time coming I guess,” John Ryan Murphy said. “That’s the kind of player that he is. He doesn’t leave the strike zone very often and when he gets a pitch to hit, he rarely misses it. I was looking forward to a day like this for him.”

Bird faced 10 pitches in the game, and only chased one out of the zone – a 1-0 fastball in the second inning that missed outside by a small margin. 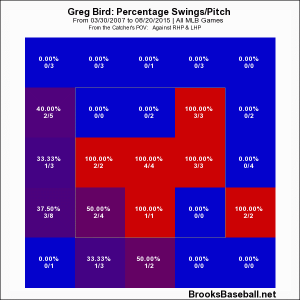 Through five career games, Greg Bird has been very selective at the plate.

At 22, Greg Bird has the offensive game of a veteran. That takes a ton of stress off of the Yankees, who are without Mark Teixeira for an undisclosed amount of time while he heals from a sore right leg. Bird can slide right into the middle of the order while Teixeira sits, and can spell Alex Rodriguez in the next month while the team gears up a for a playoff push. Bird will benefit, just as he did Wednesday, from his teammates’ careful approach at the plate.

A Miguel Cabrera comparison is large, but not necessarily naive. Cabrera’s always taken the approach of a veteran, even when he was a “wonder child” as Alex Rodriguez once described him. Both can go the other way very well, and both have incredibly quick hands.

It is, of course, too early to say for sure what the future will hold for Greg Bird. One thing is already evident – Bird is a pro’s pro, on and off the field. You wouldn’t know he shared a clubhouse with dozens of guys almost 10 years older than he is.

“It’s so much fun for me to come in every day and just watch them,” Bird said. “On the field, off the field, in [the clubhouse], talk to them, hear what they have to say – it’s really special. It’s stuff that will serve me well and that I won’t ever forget.”

He certainly won’t forget the day he hit his first big league homer, either.

Tags: Greg Bird |
Kenny Ducey
Follow @KennyDucey
Kenny Ducey is a writer for Sports Illustrated and Baseball Prospectus. You can follow him on Twitter @KennyDucey and email him at kennyducey@gmail.com.
read more from Kenny Ducey