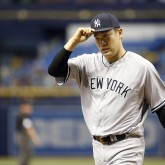 In a battle to avoid falling to the cellar of the AL East, the Yankees opened a three-game set with the host Tampa Bay Rays on Friday night and won the opener by a final score of 4-1. Masahiro Tanaka continued to be lights out for the Yankees, allowing just two hits while cruising through seven […] 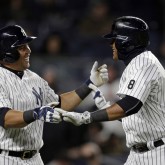 Wednesday night at Yankee Stadium featured a midweek slugfest between the Houston Astros and New York Yankees, with the Yankees scoring 12 runs in the first three innings en route to a 16-6 win. The Yankees offense scored early and often on Astros starter Collin McHugh, who allowed six runs (five earned) in just one […]