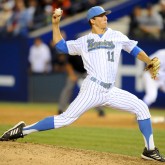 Prospects of the Week: Gosuke Katoh, 2B: At the end of 2013, second round pick Gosuke Katoh was the talk of the Yankees farm system. After being drafted that same year, he had an impressive performance in Rookie-Ball, hitting .310/.402/.522 in 50 games. With an advanced bat, average power, plus speed, and good second base […] 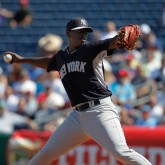 Now that the trade deadline has passed, we can all sigh with relief that the Yankees’ newfound prospect depth is almost entirely intact. Ramon Flores and Jose Ramirez, we hardly knew ye. What lies below is my entirely subjective and personal ranking of who I reason to be the fifteen best prospects in the Yankees’ […]