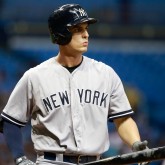 Mere months ago, Greg Bird stole Yankees fans’ hearts, but the love affair is already on hold. Bird will miss all of the 2016 season with a torn labrum in his right shoulder, the Yankees announced Monday. According to a news release, the injury is a recurrence of an injury first sustained last May. Bird […]