There’s not much time left in the season, and if you’re hungry for a division race because it’s just not happening in real life, the OOTP Yankees have you covered. Last week, the virtual Yanks finished two and a half games ahead of the Red Sox for the division lead. This week, the race with Boston took a couple of big turns.

Division lead swept away in Minnesota

The Twins are normally a doormat for the Yankees, but with Jose Berrios on the hill for Minnesota to start this series, all bets were off. The Twins’ ace didn’t go deep, but he was dominant: he struck out eleven batters in five innings and only allowed one run. The Twins led 2-1 at the time of Berrios’s departure, but his bullpen was rock solid. In four innings, they allowed only one run, while Miguel Sano blasted a solo shot for some insurance, making the final 3-2. The Red Sox were off, so the Yankees’ division lead fell to two games.

Game two didn’t go much better for the Yankees. Jake Odorizzi was good (six innings, two runs) and the Twins’ bullpen was dominant. Yet, the Yankees carried a 2-1 lead into the eighth with trusted relievers David Robertson and Aroldis Chapman set to shut the door. Unfortunately, Robertson coughed up the lead and forced the game into extra innings. Both bullpens matched zeroes until the 12th inning when Joe Mauer delivered a walk-off single against Ben Heller to win it. Meanwhile, in Boston, the Red Sox topped the Blue Jays 1-0 which shrunk the division lead to one.

Luis Severino started game three in hope to avoid a sweep, but no luck. Despite him pitching well, the bats were a no-show once again. This game also went into extra innings, level at two. Lance Lynn and the Twins’ bullpen stymied the Bronx Bombers and managed to outlast them by walking it off again, this time in the eleventh. Tommy Kahnle took the loss, though Adam Warren gave up the walk-off sacrifice fly hit by Byron Buxton. And just like that, the division lead was gone. Boston defeated Toronto, improving their record to 82-64, equal to the Yanks.

The very next day, with the Yankees not in action, the Sox won yet again to take a half-game lead in the East. Where does that leave the Yankees in the Wild Card? In the second spot, one game behind Minnesota and three games ahead of Seattle.

Another sweep, but this time the good kind

Home sweet home? The Yankees began its final homestand of the season against the Blue Jays and it didn’t look good for most of the game. Madison Bumgarner allowed five runs and was knocked out in the seventh inning with the Yankees behind 5-2. Finally, though, the bats came to life. Gary Sanchez’s eighth-inning homer (his 39th) cut the deficit to 5-4. Then, in the ninth, the Yankees rallied against Aaron Loup and Ryan Tepera. Aaron Judge capped it off with a game-winning two-run single to get the Yanks back into the win column. Boston won, Minnesota lost, and Seattle lost, meaning the Yankees division standing remained the same but its Wild Card position was a tad better. They were even with the Twins and now four games ahead of the Mariners.

The Yankees won game two thanks to a stellar pitching performance and just enough offense. Masahiro Tanaka blanked Toronto through seven innings and the Yankees tacked on four runs, leading to a 4-1 final score. Even better news was that the Yankees got help from their crosstown rivals, who beat their division rivals. The Mets 6-3 win over the Red Sox put the Yankees back on top in the AL East, by a half game.

Home sweep home. It wasn’t pretty, but the Yankees closed the week on a high note, defeating the Blue Jays 10-9. CC Sabathia started and allowed three runs in four innings, and the bullpen wasn’t much help either. Every reliever who entered after him gave up at least one run, which kept the Jays in the game. The Yankees never relinquished the lead, but the bullpen sure did come close. Good thing Gary Sanchez decided to belt three homers (up to 42 on the year, tying the single-season catcher record held by Javy Lopez) en route to a ten run game. Giancarlo Stanton hit his 50th bomb, while Miguel Andujar also delivered a long ball. Fortunately, in the ninth up one, Aroldis Chapman became the only Yankees pitcher not to allow a run in this game, notching the save. For the second straight day, the Mets did the Yankees a favor by winning against the Red Sox, bringing the Yankees’ division lead back to a game and a half. 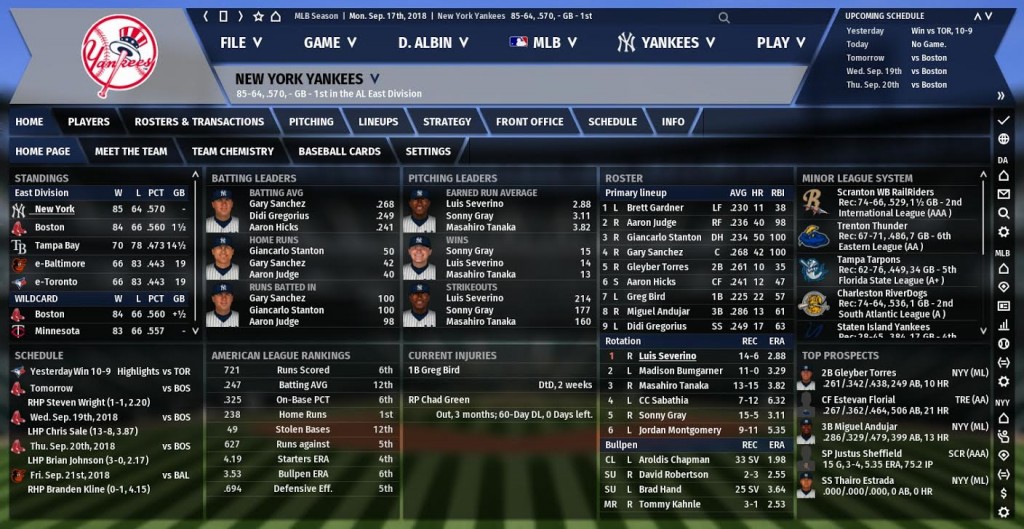 This week couldn’t have gotten off to a worse start. In a matter of a few days, the Yankees division lead was wiped away, which was two and a half games opening the week. The Twins swept the Yankees in three games, and the Red Sox were up a half-game in the division as the Yankees headed back home to New York. Fortunately, things turned on a dime back in the Bronx. The Yankees swept the Blue Jays while the Mets handled the Red Sox in order to put the Yankees back ahead in the division by a game and a half. Phew. On an individual note, Gary Sanchez had a three-homer game against the Blue Jays that gave him 42 on the season, tying him with Javy Lopez for the most home runs in a single season by a catcher. With a couple of weeks to play, he should have no issue setting the new record.