It was just last week that the OOTP Yankees handled lesser teams in the Rays and Blue Jays. With the Marlins and Orioles on the schedule for this edition, it was another opportunity to take care of business. Yet, as we have frustratingly experienced in reality with this year’s Yankees club, beating bad teams isn’t always a foregone conclusion. I guess the parallel universe Yankees share that trait, at least in this week’s update:

Safe to say that going hitless in four at-bats wasn’t how Giancarlo Stanton envisioned his return to Miami. His game was a microcosm of the team’s performance as the Marlins embarrassed the Yankees, 7-0. Jordan Montgomery struggled throughout the game, giving up five runs before being pulled with one out in the sixth inning. Meanwhile, Jose Urena was excellent for the fish. He shut down the Yankees lineup, which without Aaron Judge (suspended for two games), mustered just five hits against him. Bad timing for the Yankees to drop one against an inferior team, as Boston topped Cleveland to pull within a game and a half of the division lead.

Fortunately, the Yankees pulled themselves together in the second game of the short series down south. The team can mostly thank Luis Severino for that because he was dominant. In eight innings, he allowed only three hits, one run, and struck out eight. On the offensive side, Stanton blasted his 39th home run of the season, perhaps a sweet feeling against his former club, off Wei-Yin Chen. Gleyber Torres also took Chen deep. Overall, the Yankees scored six runs, with every player but Gary Sanchez having a hit against the Marlins’ pitching. A split was not ideal against Miami, but after losing the first game, taking game two was essential. Even more helpful was the Boston lost to Cleveland 2-1, which moved the division lead back to two and a half games.

Bats go from hot to cold in Baltimore

Before the series against the Orioles, the Yankees had an off day. The Red Sox didn’t; they won against the Indians to shrink their deficit to two games, though they’re three back in the loss column.

The final score of the series opener at Camden Yards isn’t indicative of the type of game this was. Though the Yanks came out on top 11-6, they squandered an early 3-0 lead and were only ahead 7-6 entering the final frame. Masahiro Tanaka was responsible for allowing five of those runs, including three homers. However, the Yankees played the long ball game too: Gary Sanchez, Aaron Judge (in his return from the suspension), and Miguel Andujar all went deep. But in the ninth, it was a rally that gave the Yankees four insurance runs, thanks to three walks and three singles to get the job done. Boston kept pace by beating Tampa Bay, 8-3.

Maybe the Yankees should have saved the previous day’s ninth-inning outburst for the second game because the offense didn’t muster a run in a 2-0 loss. CC Sabathia’s strong effort was wasted as Jose Mesa Jr. and Baltimore’s bullpen left the Bombers without an answer. As luck would have it, though, the Red Sox dropped their second game against the Rays.

The lack of hitting carried over into the series’s rubber game, where it only took Baltimore one run to eek out a win. That’s right, the Yankees were shut out again, this time at the hands of Kevin Gausman. Sonny Gray threw a complete game but was the loser because of Manny Machado’s first-inning solo home run. Over seven and a third, Gausman surrendered just two hits and struck out eight. In relief, Ryan Meisinger recorded the final five outs to notch the save. Though not as putrid as they are in real life, the Orioles were 54-74 entering this series, so losing two of three was simply inexcusable. By the end of the day, Boston finished off their series against the Rays with a tight 3-2 win to bring themselves within one game of the Yankees for the top of the division.

Alternate Universe Yankees: 72-57 (first place, one game ahead of Boston) 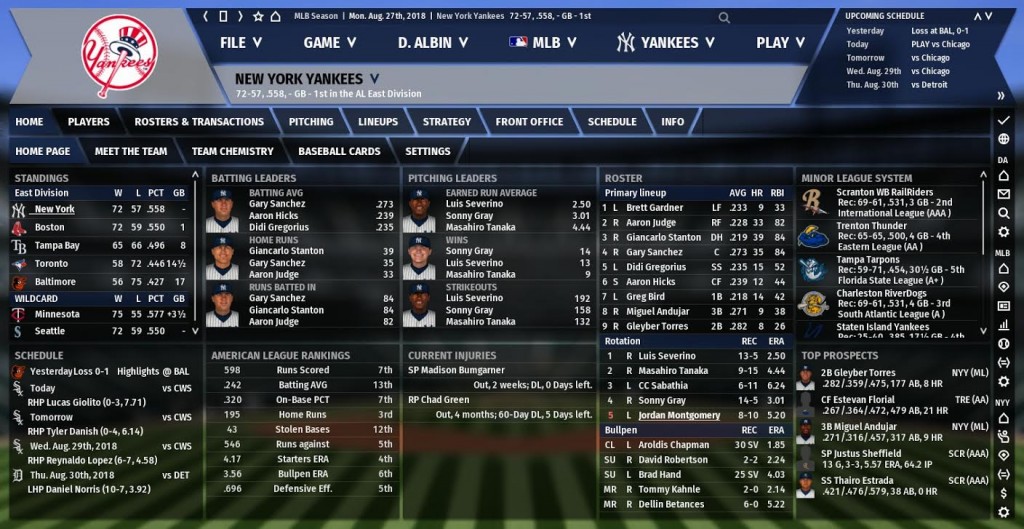 This should have been a week to feast on some of the league’s worst teams: the Marlins and Orioles. Instead, the virtual Yankees split two games in Miami and dropped two out of three in Baltimore, which allowed the Red Sox to claw to merely one game behind in the division race. All things considered, perhaps the Yankees were fortunate to still be in first place, as the Red Sox had an up and down week. That said, the biggest issue this week was the offense, which was shut out once against the Marlins and twice against the Orioles. In the game that the Marlins blanked them, Jordan Montgomery didn’t pitch well so it wasn’t the biggest deal. But to go scoreless for eighteen innings against the Orioles and only allow three runs behind stellar performances from CC Sabathia and Sonny Gray was a horrific way to close the week.