After a strong first portion of the year that ended with the Yankees comfortably in first place, it’s time for a break from regular season action. There’s meaningful baseball to be played by the end of the week, but not before the midsummer classic:

Homers aplenty in the All-Star Game

Inexplicably, this parallel universe held the All-Star game in Baltimore at Camden Yards. Even though the host city was Washington, DC in reality and that OOTP is supposed to be in line with such things, it wasn’t in this case. So be it.

The National League jumped out to a 3-0 lead in the sixth. Maikel Franco did all of the damage, blasting a three-run homer against Chaz Roe. In the bottom half of the frame, the American League responded. Brian Dozier’s two-run shot against Josh Fields cut the deficit to one. Just one inning later, the junior circuit tied the score when Alex Bregman homered off Anthony Swarzak.

The eighth and ninth innings were scoreless, setting up extra innings. To get there, Aroldis Chapman, one of the Yankees’ representatives, pitched a scoreless ninth and tenth (why he pitched two innings is a whole different issue). In the bottom of the tenth, the AL put the fear of a tie game being declared to rest. Whit Merrifield, the game’s MVP, hit a walk-off two-run homer to win it, 5-3. Felipe Rivero gave up the tater.

There weren’t quite as many home runs in this affair as there were in the real-life All-Star game, but every run was scored via the long ball in this universe. As noted, Merrifield won the MVP thanks to his game-winning blast. Aside from the homer, he also singled and walked. How did the Yankees’ reps do? Aaron Judge and Gary Sanchez combined to go 0 for 5. Chapman notched the victory with two clean innings. Luis Severino and Giancarlo Stanton didn’t play.

Subway Series in the Bronx

These aren’t your real life Mets. At 53-42 to start the series, these virtual Mets are in first place. There’s a little more juice in this Subway Series than in recent seasons as baseball resumed from the break. Before the series summary, there’s on roster move to highlight. Jonathan Holder was put on the disabled list with a shoulder subluxation that he suffered during the week off. Apparently, he hurt it playing football during the break. Oh brother. Fortunately, it sounds like he won’t be out for much more than a week. Gio Gallegos was recalled in his place.

Jacob deGrom got the best of Luis Severino in the season’s return to action, but the Mets bullpen imploded. Severino struggled, allowing four runs in five and two-thirds while deGrom threw seven strong innings of two-run ball. Up 4-2 in the eighth, the Mets went to Anthony Swarzak to hold the game in place. Swarzak exited without recording an out. Brett Gardner singled and Aaron Judge homered in a span of five pitches to tie it up and knock Swarzak out. In came Brad Brach to stop the bleeding, but the Yankees’ offense wasn’t done. After two walks to start his outing, Brach surrendered a double to Didi Gregorius to give the Yankees a 5-4 lead. Two batters later, Jerry Blevins came in to face Greg Bird. He hit a sacrifice fly to make it 6-4, which wound up being the final score.

Game two was a much easier win for the Bronx Bombers. Cole Hamels started for the Mets but was knocked around, exiting in the middle of the fourth inning. The veteran lefty allowed eight runs, including Greg Bird’s knockout blow: a two-run homer. Masahiro Tanaka started for the Yanks and allowed four runs in seven innings, though only two were earned. Dellin Betances and Domingo German each allowed a run to make the game a little closer, but with Aroldis Chapman available to close it out, the game never really seemed to be in danger. The final score was 9-6.

To complete the sweep, the Yankees would have to beat Matt Harvey (yes, he’s still in this world’s Queens). Harvey’s been quite good, with a sub-3 ERA. On the other side, CC Sabathia got the nod. CC didn’t go deep, getting pulled with two runners on and no one out in the fifth, but he did exit with a 3-1 lead. Adam Warren bailed him out of that jam, but eventually surrendered the lead in the sixth on a game-tying two-run blast by Asdrubal Cabrera. Both teams’ bullpens put up zeroes inning after inning, taking this one to the twelfth. Finally, the Mets broke through with Wilmer Flores’s solo homer against Chasen Shreve to put the Mets up 4-3, which was the final score.

After the game, the Yankees transferred Chad Green to the 60-day disabled list and added Cody Carroll to the 40-man roster. Carroll was then promoted to the majors and Domingo German was optioned to Triple-A. Carroll will help a tired bullpen from Sunday’s twelve inning affair.

Alternate Universe Yankees: 56-41 (first place, six and a half games ahead of Boston) 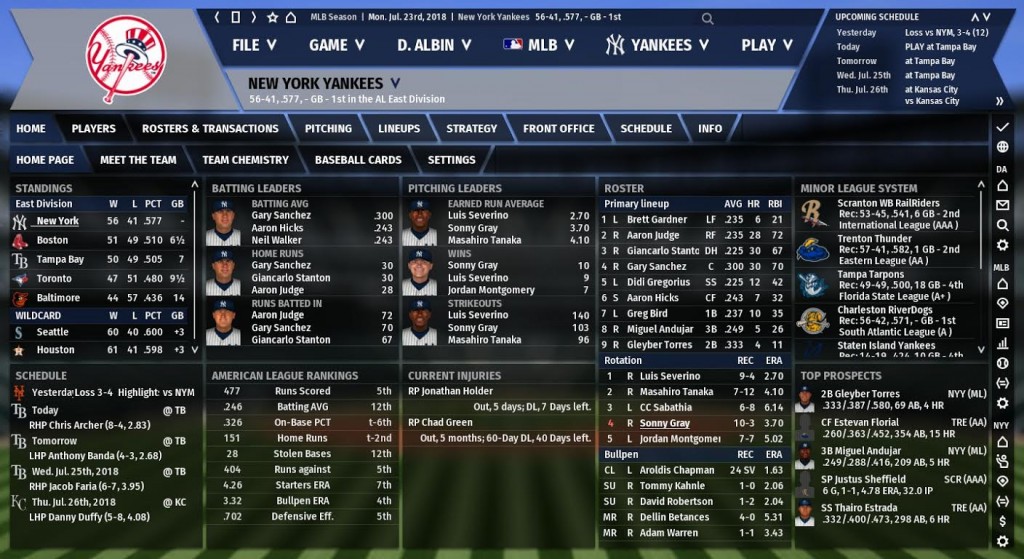 The American League beat the National League in extra innings, 5-3, to win the All-Star game. For whatever reason, the game was played in Baltimore and not Washington, DC. Upon return to game action, the Yankees took two of three from the Mets. Prior to the series, Jonathan Holder injured his shoulder playing pick up football over the break, and was placed on the disabled list. The good news is that he’ll only be out for a week or so. The series opener featured a comeback against the Mets bullpen, who blew it for Jacob deGrom. The middle game was an easier win for the Bombers. The final game went into extras, with the Mets pulling it out to avoid the sweep.