The first place New York Yankees has a nice ring to it in real life. The same can be said in alternate universes too, such as this one in which the virtual Yankees ascended to the top at the end of last week. To get to the top of the division, the virtual Yankees took three of four from the Rays to close last week. In this week’s edition, the Yankees will need to hold off the Rays once again. But first, a series against the Mariners:

A Struggle with Seattle

Just like their real-life counterparts, the OOTP Mariners are pretty good. They came to Yankee Stadium with a 43-29 record and a not suspended Robinson Cano. In the series opener, Seattle’s bullpen made a statement after five decent innings from Mike Leake. The combination of Nick Rumeblow, Nick Vincent, and Edwin Diaz no-hit the Bombers the rest of the game in order to hold a 3-2 lead. The Yankees offense just could not get the ball rolling, making Masahiro Tanaka (eight innings, three runs) a tough-luck loser.

The second game was much like the first of the series for the Yankees’ offense. Erasmo Ramirez dominated in eight innings of work as the Mariners cruised to an easy 3-0 victory. CC Sabathia pitched seven strong innings, but without any help from the bats, it was for naught.

With James Paxton on the hill for the final game of the set, the Mariners were in good position to sweep. Or, so everyone would think. The Yanks plated six runs in the first inning, with Didi Gregorius delivering the biggest blow: a three-run home run. Paxton settled down to allow just one more run in the game before exiting in the fifth while. Meanwhile, Jordan Montgomery was cruising until the seventh with the Yankees up 8-0. After rallying for five runs, Montgomery was left in with the bases loaded, and Nelson Cruz promptly unloaded them to give the Mariners a 9-8 lead. Fortunately, the Yankees’ offense responded with a few runs in the bottom half of the frame to make it 11-9, which was the final score. Sweep avoided, but gosh it wasn’t pretty.

Down to the Trop

I loathe watching the real-life Yankees play at the Trop (this weekend was particularly awful). Seems like these alternate universe Yankees fans wouldn’t like what they see there, either. The opener was a complete dud for Sonny Gray, as he surrendered 8 runs in four and a third innings of work, though three of those runs were inherited by Chasen Shreve. Anthony Banda was excellent for Tampa Bay, tossing six and two-thirds of one-run ball. With the exception of the finale against Seattle, the Yankees offense hasn’t done much this week. Aaron Judge had a particularly bad game in this one, striking out four times.

The Yankees were poised to bounce back in game two with Luis Severino on the mound. Up 4-1 in the seventh inning, it sure looked like the Bombers were on their way to an easy win. Yet, Carlos Gomez and Matt Duffy hit back-t0-back solo homers to make it 4-3, though Severino managed to complete the inning. Dellin Betances got the 8th inning, still up one run, but couldn’t bridge to the ninth. Wilson Ramos tied it with a solo homer. Fast forward to the 11th inning, still 4-4, when Aaron Judge picked up for his poor performance in the series opener. His two-out RBI single put the Yankees ahead 5-4, a lead that Aroldis Chapman saved. The win gave the Yankees a two-game cushion on Tampa Bay, meaning they’d end the week in first place no matter what happened in the rubber game.

In the deciding game, old friend Nathan Eovaldi faced Masahiro Tanaka. The Yankees greeted Eovaldi with four runs in the first inning, another in the second, and two more in the third. To score those seven runs, the Yankees only needed two extra base hits, and both came in the first inning: a Gary Sanchez home run and a Greg Bird double. On the mound, Masahiro Tanaka did the bare minimum to record a quality start while the bullpen held the lead. Aside from Kevin Kiermaier’s seventh inning homer against Tommy Kahnle, the bullpen was unscathed. David Robertson struck out the side in the eighth and Aroldis Chapman closed out the 7-4 victory. After a rough series against Seattle, winning two of three in Tampa Bay made for a break even week: 3-3. Most importantly, winning a series against the Rays meant adding another game of distance from the division’s second place club. 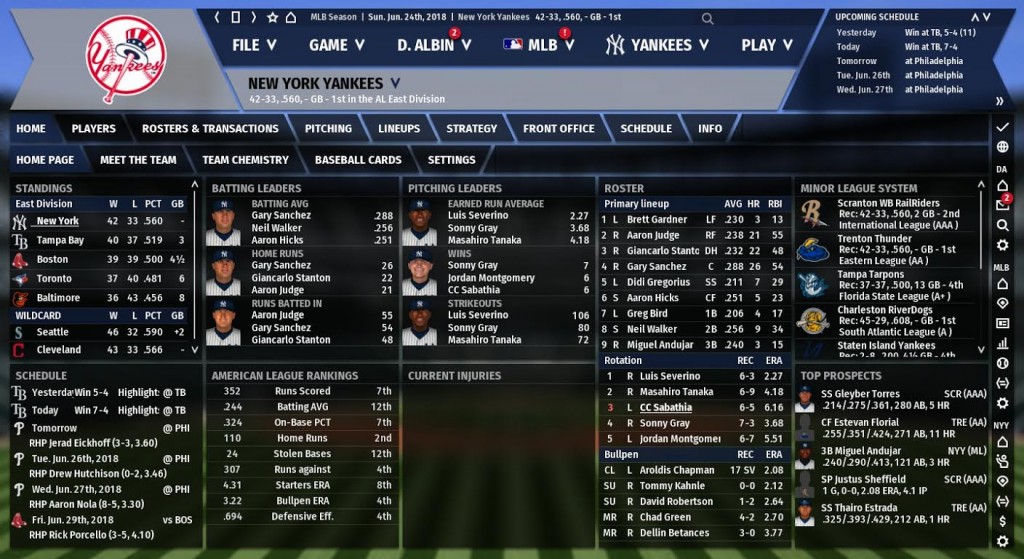 The offense sleep walked in two losses against Seattle to start the week, and with James Paxton starting in the final game in the Bronx, it appeared that the virtual Yankees were at a high risk of being swept. Nonetheless, the bats snapped to life in order to salvage that last game even though Jordan Montgomery nearly gave it away. After dropping two of three to the Mariners, the Yankees flew down to Tampa Bay for a big series against the Rays who remain on the Bombers’ tail in the division. Sonny Gray faltered in game one, but the team rebounded in the final two games at the Trop to take two of three and split the week: three wins and three losses. Winning the series against the Rays added a game to the Yankees’ division lead, making it a three game advantage.