Another week of baseball is in the books, and it’s been a topsy-turvy start for the Yankees in reality. The pitching and defense have been sloppy while the offense hasn’t quite lived up to its billing just yet. All that said, the Yankees are still hovering around .500, so at least they’ve held their own. In our OOTP world, though, the Yankees begun to heat up as the week came to a close.

No brawls, but a lifelike frustrating series in Boston

I’ll get to the series recap in a moment, but first, some surprising news to pass along. Perhaps miraculously, Jacoby Ellsbury was ready to be activated for the series in Boston. There was no heads up or notice that he was close to a return, but suddenly I was informed that he was available and had no injury time left. This happened despite being told there was no timetable for a return just a couple weeks ago. Huh. It was a tough call, but I decided to demote Ronald Torreyes to Triple-A to make room for Ellsbury. Torreyes just hasn’t been afforded much playing time, and there really doesn’t appear to be a big league role for him at the time.

Time for live baseball. Unlike real life, the OOTP Red Sox are struggling, starting at 3-6 prior to hosting our virtual Yankees. The opening game of the series was billed as a pitcher’s duel, and even though the game was low scoring, it didn’t live up to the hype as both starters didn’t work deep into the game. Luis Severino allowed one run and was pulled with two outs in the sixth. He wasn’t his usual dominant self; he walked four and only struck out three. Chris Sale, on the other hand, couldn’t get out of the fourth inning. The Yankees tagged him for three runs, including a solo homer by Gary Sanchez (his seventh already!). Both sides bullpen’s were strong, but the combination of Chad Green, David Robertson, and Aroldis Chapman shut the door for a 3-1 New York victory.

One parting note from the opening game: Green gave way to Robertson due to a left shoulder strain, his non-throwing arm. It’s not clear how he hurt it, but he’ll only be out for a couple days, so no disabled list trip was required.

Boston turned things around in game two with Masahiro Tanaka on the hill for New York. Somehow, Tanaka hadn’t allowed a home run in his first two starts of the season. That ended at Fenway thanks to a first inning Rafael Devers solo shot. That was one of two dingers that Devers hit off Tanaka, with another one coming the very next inning to make it 7-0 Boston. Yep, Tanaka had a dud, allowing seven runs (only three earned because of a Brandon Drury error, but still) in two innings. On the other side, David Price dominated en route to a 10-6 win (Boston’s bullpen struggled until Craig Kimbrel was forced to enter). To add injury to insult, Giancarlo Stanton was hit in the left hand in his third plate appearance and had to be yanked. Fortunately, X-Rays were negative so a DL trip was avoided.

In the rubber game, Gary Sanchez unleashed the Kraken again, drilling his league-leading eighth long ball. It didn’t really matter though, as Sabathia got tagged for ten (!) runs in an inning and a third (three were inherited runs that came in against Dellin Betances). The bullpen was already thin after Tanaka’s dud, so the timing of Sabathia’s poor outing was brutal. The Yankees appeared to be on the verge of a blowout loss, down 11-4 in the sixth, until Sanchez delivered yet again. His bases clearing three-run double made it 11-7 made it interesting, but Boston held on for a 13-8 win.

After the game, I optioned Domingo German to Triple-A in promoted Luis Cessa. German was still exhausted from the middle game of the Boston series, so Cessa is a necessary long relief reinforcement for the Detroit series.

A Sweep of Detroit

What’s a good cure for a struggling pitch staff? An opponent with a bad offense. Even though Detroit was 7-6 at the outset of the series, it was with some good fortune with their offense near the bottom of the American League in runs scored.

Pitching was the name of the game in Friday’s series opener, as Sonny Gray delivered the length that the bullpen so desperately needed. He threw seven innings without allowing a run and struck out nine Tigers. David Robertson and Aroldis Chapman were nails in the eighth and ninth, and the final score was 2-0.

The Saturday afternoon affair in Detroit was an offensive bonanza for the Yankees. Both Aaron Judge and Giancarlo Stanton launched long home runs against Tigers’ starter Jordan Zimmermann. It was a Jordan vs. Jordan matchup, as the Yankees tapped Jordan Montgomery, who pitched well. He nearly completed eight innings of three-run ball, only to allow a solo home run to Ronny Rodriguez with two outs in the inning. It was his 109th and final pitch, making his line: seven and two-third innings and four runs allowed. The final score was 9-4 in the Yankees favor.

The bats came up big again in the third game at Comerica on the way to a sweep. In a 14-2 blowout victory, Aaron Judge, Giancarlo Stanton, and Brandon Drury led the way. Judge hit a three-run homer, Stanton delivered a three-run triple, and Drury drove in four runs on a couple of doubles. The offense knocked out Detroit’s ace, Michael Fulmer, after just three innings. For the Yankees, Luis Severino was his usual brilliant self, allowing just two runs in seven innings. 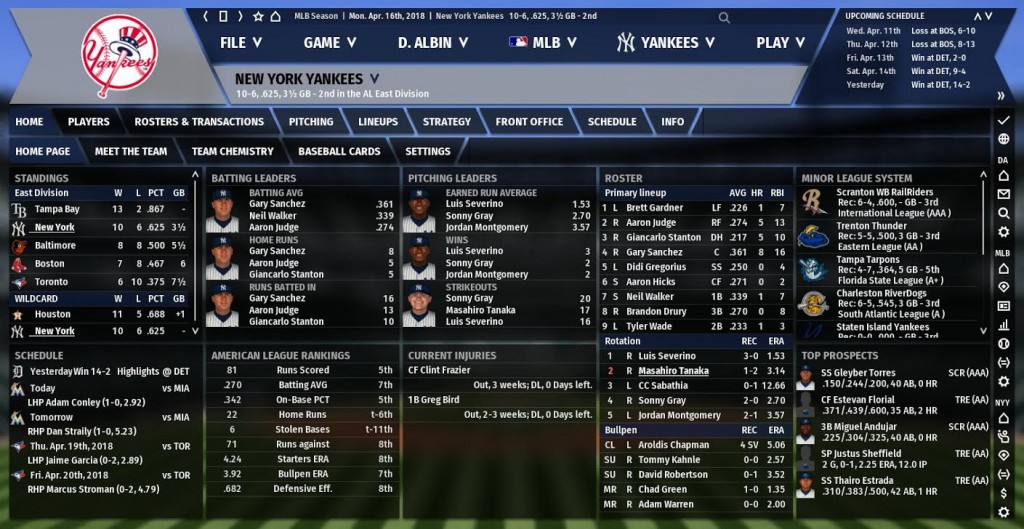 After dropping two of three in Boston, the Yankees rebounded to sweep the Tigers in Detroit in dominant fashion. The offense exploded in the final two games at Comerica Park. On the roster news front, Jacoby Ellsbury surprisingly returned for the Boston series after having a setback with supposedly no timetable for return just a couple of weeks ago. There were a couple of minor injuries to note to Giancarlo Stanton and Chad Green, and fortunately, both didn’t require any time on the disabled list. Stanton was hit by a pitch in Boston while Green strained his non-pitching shoulder. Stanton only missed a game, while Green was day-to-day though wasn’t needed the rest of the week anyway.