The 2017 season has gone remarkably well for the Yankees considering this was supposed to be the organization’s version of a rebuilding year. Prospects have turned into above average major league regulars. The bullpen has been one of the best in the game for the most part. Overall, it has been a solid year thus far in Yankee land.

One of the more surprising, refreshing, and little-appreciated aspects of the Yankees’ solid season has been the team’s base running. We usually do not spend time talking about Yankee teams and base running because…well…in recent years it has not been good. From 2010 to 2016, the Yankees posted a negative BRR (base running runs, which is the runs better than average a team is at a certain advancement opportunity, with zero representing average) in four of those seasons, including every season from 2014-2016. Take a look at the chart below: 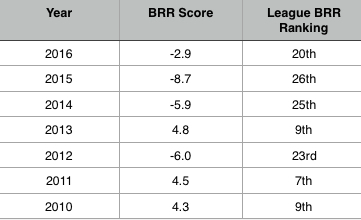 In other words, the Yankees have done a poor job in recent years at taking advantage of opportunities to take the extra base (making it to second successfully on a passed ball, going first to third on a hit to the outfield, etc). This is likely largely due to having older players who simply do not have the speed to do so. You could probably count on one hand a number of times you saw Carlos Beltran, Alex Rodriguez, or Mark Teixeira go from first to third or second to home on singles over the past three seasons.

This year, however, has been a much different story. The Yankees have collectively posted a BRR of 5.9, good for the eighth best mark in baseball (the San Francisco Giants rank first with a score of 9.6). The last time they ranked that high was 2013 when the team ranked ninth with a mark of 4.8. This year’s mark of 5.9 is the sum total of the individual scores given for the five different types of possible advancement by a base runner:

As you can see, the Yankees collectively are slightly better than average in four of the five potential advancement opportunities, while just a tick below average in taking advantage of passed balls and wild pitches (technically, balks are also included in “other”, but by rule the runner is allowed to move up a base, not by choice). The Bombers’ best baserunner in 2017 is unsurprisingly Brett Gardner, who currently boasts a personal BRR score of 3.2, good for 24th in all of baseball. Of the ten Yankees who have had at least 50 opportunities to advance a base or bases in any kind of manner (total base running opportunities), seven have posted scores above zero (again, with zero being average).

The 2017 Yankees being an overall good base running team not only passes the stat test, but it also passes the eye test. Here’s a good example of the kind of the thing that the stats say the Yankees are good at doing this season.

In the seventh inning of Thursday afternoon’s game against Detroit (in between all the brawling and bench clearings), the Yankees had team BRR leader Brett Gardner on first and Jacoby Ellsbury at third with nobody out while trailing by 6-4. Aaron Hicks hit a high fly ball to left which looked as though it was heading out for a three-run home run. Detroit’s Justin Upton leaped at the wall to rob Hicks of a long ball, but Ellsbury still tagged up from third to make it a one-run game.

Perhaps more importantly, Gardner did not get caught up in the fact that the ball may leave the ballpark but instead tagged up from first base and easily made it to second. Having the tying run at second with one out with the three and four place hitters in the lineup due up is a much better position than a runner at first with one out. And on cue, Gary Sanchez immediately followed with a ground ball single to center field that brought Gardner home with the tying run. So yes, while Sanchez gets credit for the RBI, Gardner also deserves a great deal of credit for the superb base running to get Sanchez in a situation where just a single could tie the game.

It feels nice when what the stats tell us and what our eyes/gut tell us actually coincide. In this instance, the two evaluation tools tell us that this Yankee team is quite good at taking the extra base when given the opportunity. As the regular season heads into the home stretch and playoff baseball approaches where outs are as precious as gold, this collective skill can help a team win games and ultimately series.