Greg Bird’s Spring Training stats were fantastic: a .451 batting average with eight home runs and a slugging percentage over 1.000. His first 30 at bats of the season were the complete opposite: one hit, 13 strikeouts, and a smattering of walks to keep his OBP from sinking below the .100 mark.

The staunch difference between the two became a punching bag for analysts who disregard the majority of Spring Training stats, but there were two overlooked factors that were easy evidence as to why Bird’s spring burst wasn’t translating early on this season.

Bird fouled a ball off his ankle at the end of March that could have, in a variety of ways, contributed to this rough stretch to start the 2017 campaign. The resulting bruise was in a particularly weird spot and led to, as you may have noticed, a distinct black ankle guard, different from the classic shin guard many players wear. 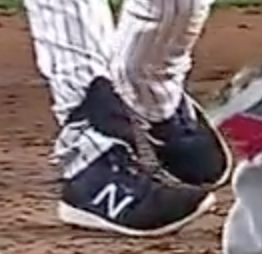 Add to that a battle with the flu early last week and we have some convincing environmental evidence that Bird’s .038 average probably wouldn’t stick. Well, that and the fact that there isn’t an offensive statistic that stabilizes (becomes usable) prior to about 100 at bats. Should we abide by that threshold? Most likely, but as long as we do so with caution, some value can be found.

The nagging injury narrative came to a halt at about 8:45 p.m. Sunday night, when Bird took a 90-mph sinker 400+ feet to right field — easily the best swing he has put on a ball all year, and probably since 2015. The very simple approach to pitching Bird is similar to that of many other big left-handed bats: down and away. As you can see from our zone profiles below, among Bird’s approximate 200 plate appearances at the major league level from 2015 and 2017, this is exactly what he saw (the chart on the left denotes where Bird has seen pitches in his career).

Bird thrives on pitches in the zone and, unlike some other big power bats, can actually reach the outside corner with effectiveness (the chart on the right shows his resulting isolated power numbers on all regular season batted balls). The Wainwright sinker that was deposited into the right field seats caught too much of the plate middle-in, and Bird swung like we’ve seen him do in the past: compact, on a swing plane that produces fly balls and smooth as silk from contact to follow through. 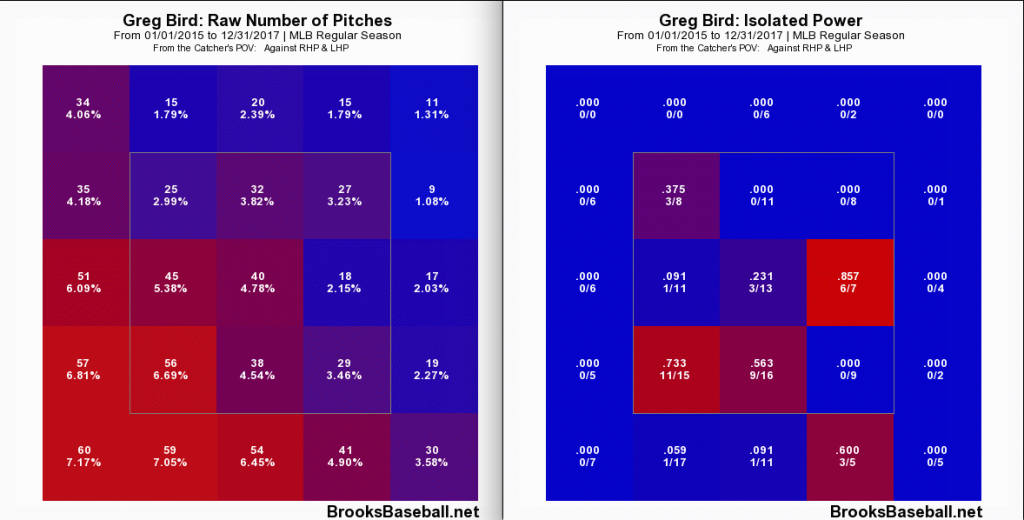 Bird went on to double off Wainwright again in the fourth inning on another middle-of-the-zone sinker, following that up with a seven pitch walk versus Sam Bowman, who had at that point been a minor bright spot on the reeling St. Louis bullpen. His final at bat rounded out a 3-for-3 night, as he singled on an 0-2 pitch on the outer part of the plate, displaying his ability once again to barrel up pitches in the ‘.733′ isolated power quadrant in the zone profile above.

One reason Bird’s final line might edge closer toward the 90th-percentile is due in part to his place in the batting order. Joe Girardi batted Bird third for the first four games of the season, but his slow start has since cost him the spot. Keep in mind, as we discussed above, Bird’s ankle issues and the flu played into the early season struggles. With those issues seemingly in the past, and with no concrete lineup through the first three weeks of the season, I think he can easily push back up in the order if Sunday’s game truly is a sign of success to come. Combine that with Bird’s 50+ percent fly ball rate in the midst of a speculated fly ball revolution, and the 137 home runs hit by lefties in Yankee Stadium last season (highest of any major league ballpark in 2016), and projecting Bird for less than 20 home runs seems to overemphasize the health concerns he’s dealt with in the past.

I’m very excited for the next few weeks of Bird, brought on by a combination of factors including last night’s approach and success. Is this an overreaction to the minuscule sample of one game? Not exactly. We know that Bird doesn’t project as a sub-.200 hitter or possess a sub-.300 OBP approach. We also know what environmental factors may have initially hindered his first batch of plate appearances. This one game isn’t the reason that Bird will turn the corner, but it could be a sign of success to come especially as he continues to find his rhythm at the plate (for anybody who doesn’t believe in rhythm, check out this video of Josh Donaldson breaking down his approach). Before we know it, Bird may be sporting the near-.500 slugging percentage from the left side the Yankees’ lineup craves to take another step forward.

In case you were wondering, sections 205 and 206 encompass the second deck in Yankee Stadium’s right field. Here’s a link to tickets. Go get yourself a Greg Bird home run ball.