The most dreaded time of the season for players, coaches, and fans alike are the so-called “dog days” of August. It’s the sweet spot of the season when players are exhausted from four months of over 100 ballgames, but still have a two-month grind of crucial baseball to play before the end of the season or postseason. The August heat and humidity only add to the daily grind, making the month a breeding ground for sluggish baseball, hollow crowds, and an overall lethargic environment.

Unsurprisingly, the teams that are most prone to falling under the dog days curse are those who recently sold at the deadline. Much of the time, the best players on the club, those who can win games and turn heads on the field, have been shipped off for better teams. It’s a sure way to take the wind out of a team’s sails and spur a two-month-long nosedive. Finding motivation to power through the dreary climate and play good baseball can be nearly impossible.

The Yankees should be in this scenario, but somehow they’ve managed to weather the storm and are having, by far, their best month of 2016. Even stranger, the source of this unexpected success is directly related to the team’s trade deadline, which was supposed to dismantle the roster, not breathe life into it.

On deadline day, the team was 52-52 and seven games out of the division after four straight losses (three against one of the worst teams in baseball). Carlos Beltran, Andrew Miller, and Aroldis Chapman, three of the best players on the club, were traded, and the team essentially waved the white flag (despite what Joe Girardi may have insisted).

Since then, the Yankees have gone 8-5 (good for their best winning percentage in a month this season) and recently won five of their last seven games. Maybe they aren’t a playoff team, but the club has refused to fall victim to the depressing August setting. Instead, they’re playing their best and most exciting baseball of the year.

The buzz surrounding Yankee Stadium isn’t because of Mark Teixeira’s impending retirement, or Alex Rodriguez’s recent departure…in fact, it’s the exact opposite. New York has been reignited, and it’s because the Yankees are letting the kids play. 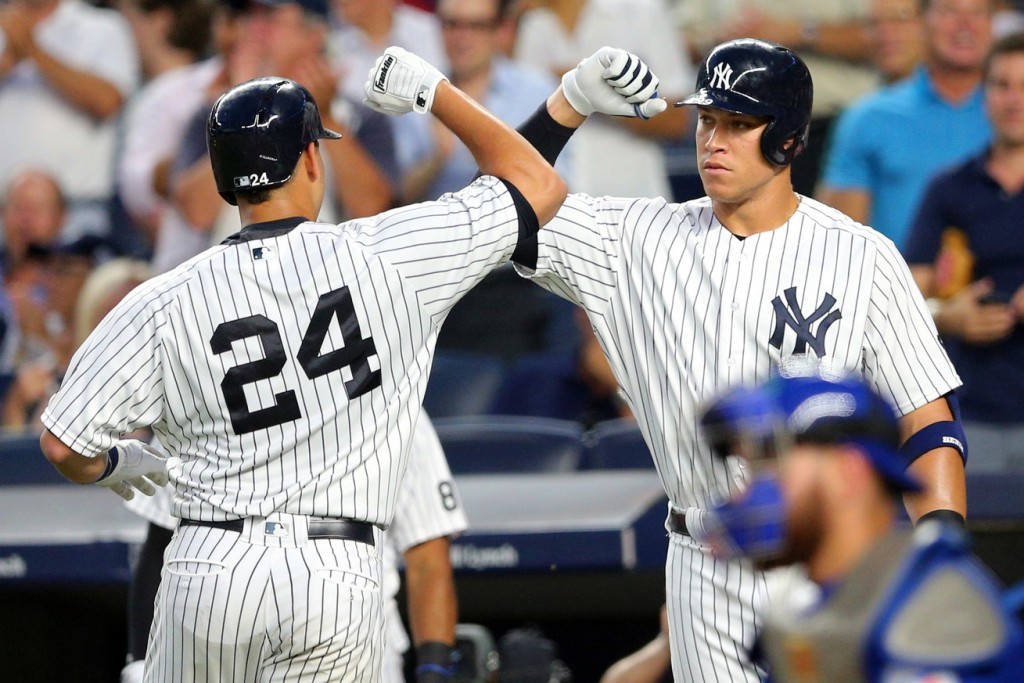 It’s something that fans have been begging for over the past five years, but only now is becoming truly possible. The Yankees have cleared roster space and rebuilt the farm system, stacking the high minor leagues with a bevy of impact talent that is near big-league ready. There’s nothing more exciting than a shiny new toy, and the Yankees have a few of them.

Just over two weeks ago, at the trade deadline, the team’s future drastically changed. Now, the team itself is transforming. It began when Teixeira and Rodriguez, two of the final relics from the last decade of Yankees’ baseball, announced their retirement. With the pair gone, the Yankees will be left with just two players from the 2009 World Series roster—Brett Gardner and CC Sabathia. It’s the start of a new era in the Bronx, and the Yankees have begun to infuse their roster with new, young talent.

It started with Gary Sanchez’s promotion to New York on Aug. 3. He notched his first major league hit that night, and followed it up with doubles in three straight games. Finally, last Wednesday to the chants of “Yankees suck!” at Fenway Park, Sanchez pummeled a massive solo home run, 426 feet into the center field bleachers.

And it didn’t stop there. Sanchez has somehow managed to upstage the offensive show with his arm behind the plate, gunning down three baserunners in just five games, and even slugged another home run on Sunday.

The catcher continued his assault on baseballs with two massive home runs on Tuesday, each, like his previous two longballs, traveling over 400 feet through the thick air. Sanchez is already a fixture in the lineup and behind the plate, and will be playing nearly every day with Alex Rodriguez now gone.

Speaking of Rodriguez, his last day as a Yankee marked another huge event for rookies. The Yankees took advantage of the roster space opening up by promoting the unbelievably hot-hitting Tyler Austin, owner of an outrageous .327/.418/.643 in Triple-A this season. Austin has beat cancer, a devastating wrist injury that almost derailed his baseball career, and powered his way to the show this season. He didn’t make the trip alone, though. Perhaps influenced by the “We want Judge!” chants in the stadium the night before, or his monstrous home run in Triple-A just minutes after the fans called his name, the team promoted 6’7″ behemoth Aaron Judge to the big league club on the same day.

The dual promotions paved the way for what may be the best moment of New York’s season. It began with Austin making his way to the plate for his first major league at bat on Saturday. He watched a fastball come in for strike one, swung at a changeup to go down 0-2, took two balls, fouled another changeup off, and then crushed a heater the opposite way into the right field seats for a home run. It was the perfect debut for Austin. Next up was Judge, and, well, you know what happened next. The right fielder ambushed a changeup, hitting it 446 feet to dead center, off the black windows of the restaurant…a place where all but the strongest sluggers can’t even dream of reaching.

The two rookies haven’t stopped, with Austin chipping in two more hits and a steal in the seven at bats following the home run, and Judge hitting a single and launching another home run in the following game. He followed it up with an RBI double on Monday, which would prove to be the winning (and only) run of the game. Suddenly, the bottom of the Yankees’ order has become must-see television. Sanchez, Austin, and Judge all hit next to each other, and fans can’t wait to see what the three do next.

What’s more, this may just be the start of the fun. Luis Severino, the electric strikeout artist who can live in the high-90’s, has had a brutal season but is just 22-years-old and flashes top of the rotation upside when on. Five-tool outfielder Clint Frazier is in Triple-A and may be knocking on the door to the big leagues by September, and there are dominant minor league relievers J.P. Feyereisen and Ben Heller who came along with Frazier from Cleveland in the Andrew Miller trade. Heller has already spent a couple of days with the big league team, and Feyereisen isn’t far from a call-up either.

Today, fans aren’t rooting for a boring team lacking a purpose. The franchise has been given a direction, while also revitalizing the roster with head-turning talent and new hope. Rooting for the Yankees is fun, but rooting for the Yankees while simultaneously cheering on and welcoming the future is even better. This horde of top prospects will not only be exciting to watch, but they can instantly improve the Yankees and allow the team to power through the dreary times of August. Perhaps they aren’t a playoff team, but the Yankees’ young nucleus is slowly but surely rising to the big leagues and can immediately help the club out. Even if there are some bumps in the road, you can be sure the Yankees will no longer be boring.

Went to my first game in two years Saturday for the 1996 reunion and ended up getting super lucky to see Judge’s first game. Me and my friends and family used to text and call every day about the team and the games but the past couple years those conversations have dried up. Not only wasn’t it a good team, but it seemed to be a team without a direction. Now? Even if they’re a just .500 team, it’s at least fun to watch again. and I think we can be back in contention as soon as next season.
Our starting lineup for 2017?
CF Ellsbury
SS Didi
1B Bird
RF Judge
C Sanchez
LF Frazier
DH Austin
3B Headley
2B Castro

That has the potential to be one of the best lineups in baseball and I’m ready to embrace this next era of the Yankees. I’ve already watched more games this week than I have all season and I will be going to a lot more games now.

Kudos to Cashman for rebuilding this lineup so quickly into a force. Now the next challenge is to try to get a rotation that can give these guys a chance.