Not every week can go as swimmingly as the previous one did, I guess. Just as the virtual Yankees got on track, things took a turn in this week’s catch up with the OOTP universe Yankees.

Before getting into game action, the virtual league stocked up on amateur ballplayers just like in real life. As you might expect, the draft results were different than in reality. Casey Mize was not the first overall pick and instead fell to number five with the Reds. The Tigers selected Ethan Hankins (right-handed starter) with the first pick, who was taken 35th by the Indians in reality.

The Yankees first selection was not Anthony Seigler. For what it’s worth, Seigler isn’t much of a prospect in OOTP. He only has a 23 future potential (20-80 scale) according to Yankees scouts in the game. Per OOTP’s scouting system, which isn’t linked to any particular team and can vary from each team’s opinions in the game, pegs Seigler as a future 48. Seigler was taken by the Diamondbacks in the seventh round.

So, who did the Yankees take in the first round? High school shortstop Cal Conley, who went undrafted in real life. The virtual Yankees were able to sign Conley away from his commitment to the University of Miami (FL). His future potential sits at 79 per virtual Damon Oppenheimer, though OOTP’s scouting bureau is not nearly as optimistic (41). Time will tell who was right. On to the game action…

A short set in Toronto

With the draft out of the way on Monday, baseball returned to action on Tuesday. An exciting pitching matchup to start the series north of the border – Luis Severino vs. Marcus Stroman – didn’t live up to the billing, as neither pitcher made it past the fifth inning. Severino got the best of Stroman, though, as the Yankees offense took care of business. The biggest highlight was a three-run home run by Miguel Andujar that gave the Yanks a 4-2 lead in the fourth, from which they’d never look back. The final score: 8-3 Bombers.

The Yankees suffered two losses in the second and final game in Toronto. Not only did the Blue Jays come out on top, 3-2, but also Sonny Gray left due to injury. The righty tore his fingernail and left the game after four innings. Whether or not he makes his next start remains to be seen, but he probably will avoid the disabled list for the time being.

Unlike real life, the Mets aren’t doormats in this alternate world. Rather, they entered this series with a respectable 33-28 record. Plus, they’re a bit healthier than in real life, as Noah Syndergaard was ready and able to pitch the first game of the series. He dominated through eight innings, allowing just one run in a 3-1 Mets victory. Masahiro Tanaka was solid for the Yanks, but not good enough to beat Thor.

The second game was something special thanks to CC Sabathia. No, it wasn’t because of his pitching. Rather, CC blasted a three-run homer against Jacob deGrom. Yes, against deGrom! Oh, what I would do to see Sabathia hit a home run in real life, just like he used to about a decade ago. Anyway, the Mets’ ace allowed four home runs as the Yankees obliterated the Mets in game two. Aside from Sabathia’s tater, Greg Bird, Aaron Judge, and Didi Gregorius all went deep in the 12-5 victory.

The rubber game was a bit embarrassing. After crushing Jacob deGrom the night before, the Yankees were shut down by Jason Vargas. Ugh. The southpaw threw six shutout innings before handing it over to the bullpen, which allowed just one hit over the final three frames to seal a 3-0 victory for the Mets. 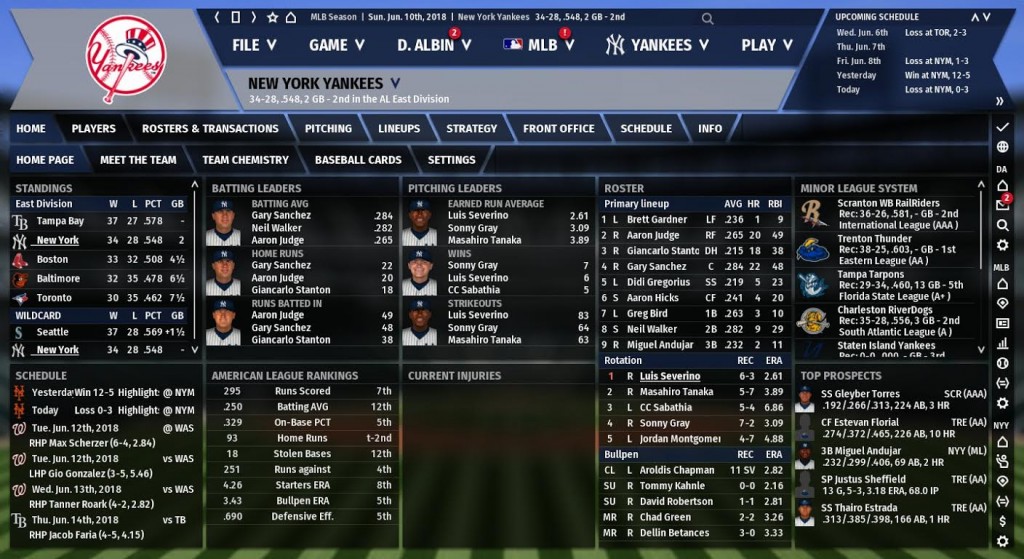 Draft day came and went before baseball games were played in Toronto and Queens. The Yankees top pick was shortstop Cal Conley, a high school pick. Once game action began, the Yankees struggled. They split a two-game set north of the border, but also lost Sonny Gray to a torn fingernail in the process. It doesn’t seem like Gray’s injury will be a long-term issue, but he might not make his next start. The Yankees returned to New York to begin the subway series against the Mets in Queens. Aside from a fun middle game of the series in which CC Sabathia hit a three-run jack against Jacob deGrom, there wasn’t much else to write home about. The Mets snagged two of three wins from the Yankees, giving the Bombers a losing week: two wins in five games.