The first full week of the baseball season is now history, which means that the virtual Yankees’ first full week is complete as well. If you missed last week’s introduction, click here to check it out.

The alternate universe Yankees opened this week with a 3-1 record, one game ahead of their real-life counterparts. This week came the first home series of the season, with Tampa Bay and Baltimore in town. Before we get to those games, let’s quickly circle back to an injury item from last week’s post. Remember how Jacoby Ellsbury had a setback with no timetable for return? OOTP was on to something, clearly. The real Ellsbury has a “hip thing” and his return is uncertain. The game is a bit too on the nose here. With that, on to the games:

No snow in the OOTP universe, so the home opener went on as scheduled. After a quiet first couple of innings, the Rays broke through against Jordan Montgomery for a couple of runs in the third. Curt Casali did the damage on a two-run double with two outs. Those two out runs are the worst. Montgomery would surrender one more run in his five innings of work on a solo home run to Mallex Smith.

On the other side, Tampa Bay’s starter Matt Andriese was dominant. He posted zeroes through seven innings and departed after a leadoff triple in the eighth (Tyler Wade). That run would come around to score the next batter due to a Brett Gardner single with reliever Andrew Kittredge on the hill. By that time, though, it was 6-1 Rays as Chad Green and Jonathan Holder allowed three runs combined. For good measure, Adeiny Hechavarria tacked on a solo blast in the ninth inning off Chasen Shreve, bringing the score to its final: 7-1. Up next was an off day before the second game of a two affair set vs. the Rays.

With Montgomery’s start making the rotation’s first turn complete, there was a choice to be made: with the off day in hand, it wasn’t completely necessary to fill Luis Severino’s void (remember, he’s out with an oblique injury). I could have chosen to pitch Masahiro Tanaka on regular rest, but I decided that because the season is still in the early stages, there’s no need to. Domingo German got the nod for his first start of the season.

Things did not go well for German in the early going. A three-run second inning highlighted by a two-run blast off the bat of Joey Wendle put the Yankees in an early bind. After a clean third and fourth inning, German failed to finish the fifth, giving way to Adam Warren after a Matt Duffy solo home run.

Chris Archer gave the Yankees two opportunities to score, but the offense couldn’t capitalize. Archer worked out of a bases loaded, one out jam in the bottom half of the frame by striking out Brandon Drury and Tyler Wade. The Yankees loaded the bases again in the sixth to no avail. Three consecutive two-out singles knocked Archer out of the game, and in came southpaw Jose Alvarado to face lefty Tyler Wade. Alvarado prevailed and struck out Wade to escape the jam. It was still 4-0 at the time.

The Yankees bullpen was solid…until the eighth inning. Warren and David Robertson kept the Rays off the board for a few innings. Oh, that eighth inning though. Robertson promptly loaded the bases, and in came Dellin Betances. Out went Daniel Robertson, hitting a grand slam to blow it wide open at 8-0. That would be the final score, dropping the Yankees to 3-3.

After the game, I noticed that the Red Sox designated Mitch Moreland for assignment. Even with Greg Bird still out for a long period of time, I don’t think it’s worth investigating further.

With the Rays series complete, virtual Baltimore came to visit the virtual Bronx. In the first game, Masahiro Tanaka and Alex Cobb had a pitchers’ duel. Cobb pitched six scoreless before giving way to the bullpen, while Masahiro started the seventh inning but didn’t record an out before handing the ball off.

The Orioles scored twice on Tanaka, once on a sacrifice fly by Chris Davis in the sixth. The second run was an inherited run to score against David Robertson. Here’s how it happened: Tim Beckham tripled to right-center to lead off the seventh to end Tanaka’s evening. In came Robertson to hopefully perform his Houdini act. He struck out Anthony Santander and induced an Andrew Susac pop-up, but Adam Jones followed with a clutch two-out single to make it 2-0.

No runs scored in the eighth, so in order to keep it close, in came Aroldis Chapman for the ninth (who needed the work anyway, not having pitched in four days). He was greeted rudely. Andrew Susac (two-run) and Adam Jones (solo) hit back-to-back long balls against Aroldis Chapman in the ninth to make it 5-0.

So, how about that Yankees offense? One run in the home opener, blanked in the second game vs. the Rays, and on the verge of a shutout once again in this one. Finally, though, Gary Sanchez delivered a solo homer in the ninth to cut the lead to 5-1. Thereafter, Didi Gregorius walked and Aaron Hicks doubled, still with no one out. A wild pitch made it 5-2, and in came Brad Brach in the middle of the at-bat against Neil Walker. He hit a sacrifice fly to make it 5-3, but Brach would shut the door from there. Game over.

Cruising to a nail-biter

After three straight losses without much offense to show, the Yankees bats came alive on Friday night.  Neil Walker’s solo shot in the second inning gave the Bombers a 1-0 lead and got the party started. Brett Gardner delivered an RBI single a couple batters later to make it 2-0. Judge followed with an RBI double, and it quickly was 3-0. It was very nearly 6-0 when Stanton flew out to the wall to end the second frame.

It was 4-0 in the top half of the fifth when Baltimore rallied and chased CC Sabathia from the game. Chad Green managed to clean up the bases load mess left behind for him, making Sabathia’s final line: 2 runs allowed in 4.1 innings of work. It didn’t take long for the Yankees to regain its four-run cushion thanks to a Gary Sanchez two-run blast in the bottom of the frame.

Later, with a 7-3 lead, Jonathan Holder was tasked with the eighth inning which he handled cleanly. He then retired the first two Orioles he faced in the ninth before allowing two consecutive singles to Trey Mancini and Mark Trumbo. Then, of course, like the real-life Holder, allowed a three-run dinger to Jonathan Schoop to make it really interesting, 7-6. In came Aroldis Chapman, and fortunately, the flamethrowing southpaw retired Chris Davis on strikes to end the game.

After eight strong innings from Sonny Gray (1 run allowed, 8 strikeouts), it looked like he might have no victory to show for it with the score level at one apiece. In the bottom half of the eighth, though, the Yankees finally broke through. Tyler Wade led off with a single, which brought up Austin Romine. This was the perfect situation for a pinch hitter, and up came Gary Sanchez instead of Romine. On cue, Sanchez hit a go-ahead 2-run home run to make it 3-0.

With Chapman having pitched back-to-back days, Tommy Kahnle entered for the save against Baltimore’s two-through-four hitters. His first save of the season went swimmingly, including back-to-back strikeouts of Manny Machado and Jonathan Schoop to end the game.

Montgomery and the bullpen blank Baltimore

Starter Jordan Montgomery didn’t have a great outing (better than real life, at least!). Though he didn’t allow a run through five innings of work, he threw 82 pitches and came out in favor of Adam Warren. Warren delivered two shutout frames. Next up was Tommy Kahnle, the prior day’s closer, and he tossed a clean eighth. David Robertson received this game’s save opportunity with Aroldis Chapman still a bit fatigued, and Robertson shut the door on a 3-0 victory.

How did the three runs score? A balk in the third and a two-run blast by Giancarlo Stanton in the fifth. 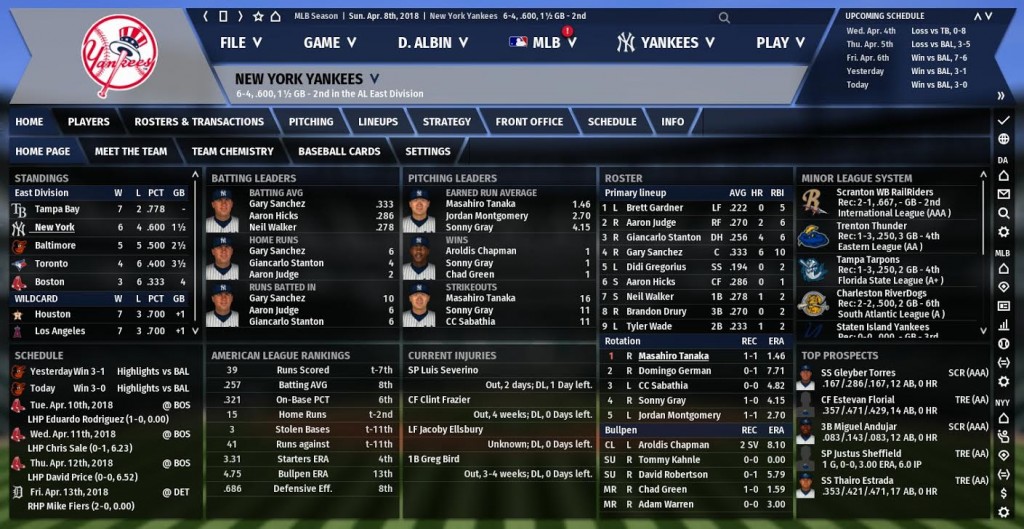 The virtual Yankees went 3-3 at home to start the season, but it certainly could have been worse after dropping the first three games. The offense dragged, scoring more than three runs in only one of the six games. It was a healthy week, at least.