Ever since Joe Girardi took helm of the Yankees way back in 2008, fans have been dismayed at his poor bullpen management. Girardi seemed unable to call the right reliever to face the task at hand. And sites like Bleacher Report, The Sports Quotient, Bronx Bomber Ball, and SB Nation’s Pinstripe Alley were quick to deride the Yankee manager when his call to the bullpen backfired. Even doing a basic Twitter search will lead you to many fans tweeting about Giradi’s incompetence.

But, believe it or not, Girardi was not ignorant when it came bullpen management as we are lead to believe.

In the 2016 Baseball Prospectus Annual, Rian Watt and Rob Arthur debuted weighted reliever management plus (wRM+*) “in order to better understand the degree to which big-league managers match their best relievers to the game’s biggest moments.” Watt and Arthur’s methodology ranked each reliever’s DRA and their average game leverage index (gmLI is taken from FanGraphs.com) by season. These were then correlated to check who were the most effective managers when it was time to make a call to the bullpen.

Ideally, we want a pitcher with a lower DRA facing higher leverage index moments. Managers with a DRA-gmLI correlation closer to -1 are those who are better at bullpen management. The results are then scaled to 100, similar to wRC+ and OPS+, 100 being average, and everything above 100 being above average, everything below being below average.

Over the past couple of weeks, I was looking over Arthur’s code and surprisingly found that former Yankees manager Joe Girardi was one of the best bullpen managers of this century. In the following table, I’ve taken the manager leading the league in wRM+ and then showed Girardi’s rank and his wRM+, with the difference between the leader and Girardi. The results were as follows:

Or, if you like a more visual approach, here’s the same table in graph form (red dots represent the league leader for the season): 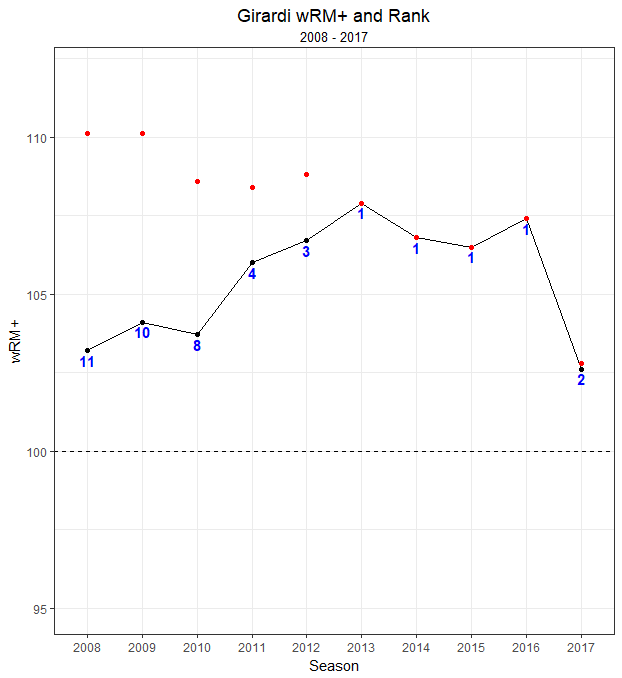 Except for his first three seasons, when even then Girardi was better than league average, Girardi has been among the top four — and leading the league between 2013 and 2016 — in bullpen management, according to wRM+. He might have even led the league in 2017 but lost out to Bud Black by 0.2 points!

Yes, it helps that over the past five seasons Girardi has had the likes of Mariano Rivera, Dellin Betances, David Robertson, Andrew Miller, and Adam Warren. But knowing which pitcher to use depending on the game situation is even more crucial. Sure, you can send Mariano out every ninth inning, or always use Betances as the setup man. But that’s not always the case.

Over the past few seasons, we’ve seen managers become savvier as to when they should deploy a reliever – regardless of their label as a ‘setup-man’, ‘closer’, ‘late-innings eater’. Girardi, as he’s gained more experience managing, started to use his best relievers for the most important game situations. Yes, the decision may sometimes have blown up in his face – and the media is quick to paint him in an unfavorable light -, but most of the times, the call was the correct one.

Managing baseball is hard, and in a game where bullpen specialization is giving way to #bullpening and reliever deployment based on leverage index, Girardi was among the best.