Memory is a funny thing. It’s easy to recall standout players and disappointing performances, but practically everything else is murky. Ask anybody with a faint interest in baseball about Aaron Judge’s 2017, and that person should have no problem rattling off a glowing summary. On the other hand, a negative quip would be expected about Chris Carter’s time in New York. Most performances that are situated between Judge and Carter don’t evoke immediate reactions, and instead challenge our memory, if there is anything to remember at all. Quickly, try to answer this without opening up another tab: how did Adam Warren do in 2017? Yeah, I got nothing too.

Some players floor us, some make us cringe, and some are ho-hum. Warren falls into the final category as a swingman/middle reliever without a blazing heater or a tantalizing breaking ball, so it’s understandable to have little to no recollection of his season. It doesn’t help that he missed time with shoulder and back maladies, so we watched portions of the season without him even available to play. When healthy, he seems like a fine pitcher, but nothing about him jumps off the page. Yet, this forgettable right-hander delivered an excellent 2.35 ERA in 57 1/3 innings in 2017. It’s not often that a player with a 2.35 ERA can fly under the radar, but it seems like Warren did just that. And yes, I know that reliever ERA can be misleading, with inherited runners and all that. Delving deeper, though, and we find that there’s a strong argument to be made that Warren was the Yankees’ second-best reliever all season. His 2.53 DRA only lagged behind David Robertson’s 2.30.

Not only was Warren great in comparison to his teammates, but he also stacked up remarkably well against the rest of the league. Of all relievers to throw 40 or more innings in 2017, Warren ranked 14th in DRA (If you think 40 innings is arbitrary, Warren drops to 15th at a 10 inning minimum). It was a spectacular season for a blasé pitcher.

The funny thing is that there are a handful of pitchers on this list that are surprising. Who is Trevor Hildenberger? What’s an Alex Claudio? Peter Moylan is still around? Warren’s not all that different than those three. Most others make total sense, like Craig Kimbrel and Andrew Miller.

So, how did Warren do it? Certainly not with overpowering stuff. His run of the mill 93.07 MPH average fastball velocity was steady within his career norms. The thirty-year-old didn’t find a new pitch, either. He did fare better than usual with home runs allowed and BABIP, so perhaps there was a bit of luck involved, but DRA does account for that sort of thing. If BABIP or something else was significantly skewing Warren’s true performance, DRA would tell us as much. Indeed, his DRA was higher than his ERA, but only by 0.18.

What Warren did change was his pitch selection, and quite starkly. Historically, as a reliever, Warren has been a fastball-slider guy that could mix in a curveball or changeup. In 2017, Warren was still a fastball-slider pitcher, though he began to heavily rely on the slider. This isn’t a surprise, as pitching coach Larry Rothschild has emphasized less reliance on the fastball. The slider became Warren’s bread and butter this season and opposing hitters didn’t do much with it (.255 xwOBA and .235 wOBA). Overall, Warren set career bests in strikeout rate (24.2 percent) and average exit velocity (85.3 MPH).  Warren’s not the type of pitcher who can dominate with a fastball, like Aroldis Chapman and Chad Green can, so it made plenty of sense to alter his philosophy. Sure seems like it worked. 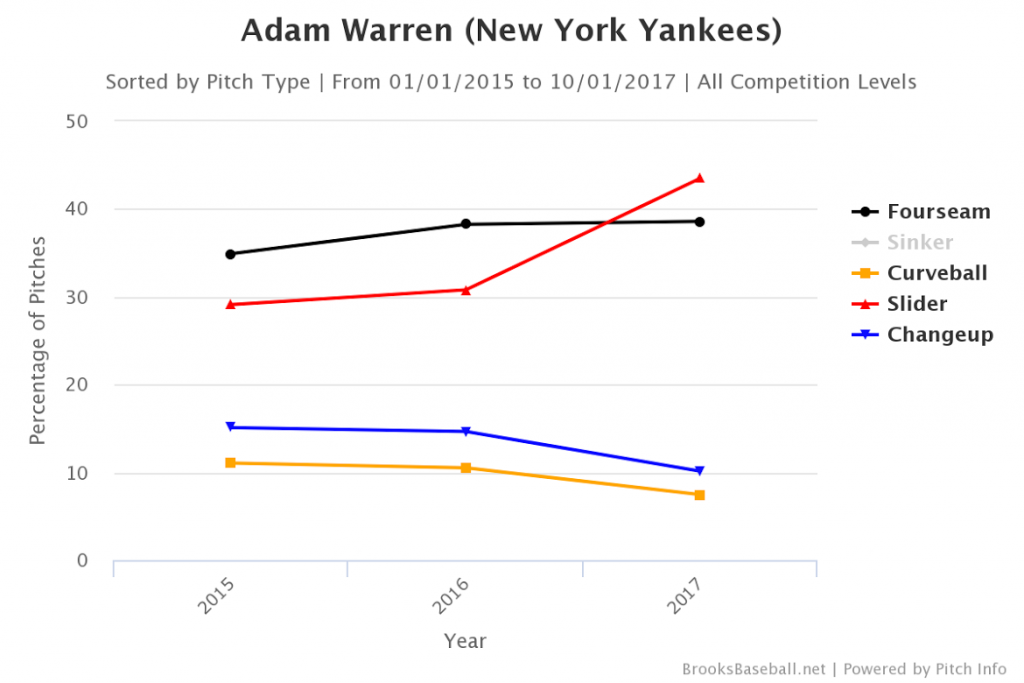 Not all adjustments made are noticeable, much like how only certain performances stand out. We notice when a player adds a leg kick to his swing, but a change in repertoire allocation doesn’t always catch our eye (unless your name is Lance McCullers). Perhaps that’s part of the reason why Warren’s excellence was missed. Even though he started relying heavily on his slider, he still looked like the same pitcher with the same stuff. The eye test just doesn’t fall into Warren’s favor, no matter how good the results and underlying stats indicated.

All of this isn’t to say that we let a historical season pass right beneath our feet. Warren’s campaign wasn’t some sort of legendary reliever performance like Mariano Rivera’s 1996 or Eric Gagne’s 2003. And, even though DRA disagrees, I’m fairly confident saying that in addition to Robertson, Chad Green and Tommy Kahnle were better than Warren this past season. It’s also fair to doubt if Warren can approach this level performance again next season. Regardless of comparisons or what the future holds, the point is that Warren was unheralded in 2017, and deserves some kudos for a stellar season. Give yourself a pat on the back, Adam, nice job.