Every baseball player has a point of weakness—an Achilles heel, if you will. For a batter, it’s often a specific location in or around the strike zone that gives them fits. It doesn’t matter who you are…even Mike Trout has shown vulnerabilities in his swing. Luckily, most are able to overcome their flaws, either by adjusting mechanically or in their approach.

With that in mind, it stands to reason Starlin Castro can prevail over his own kryptonite that has led to an abysmal 2016 season. Then again, the place of concern for most hitters doesn’t occupy over a fifth of the plate.

I could go into depth about this black hole that has proved to be the bane of Castro’s existence, but it’s likely most Yankees fans already know what it is. It’s been a constant problem for Castro all season, one that becomes alarmingly apparent in almost every one of his at bats. Probably the best way to sum it up is in a single video.

Perhaps the average Yankees fan doesn’t remember this exact moment—Castro striking out to end a tough loss against the Royals—but they probably remember this scene, because it’s happened time and again this season. It’s not about the pitcher (anyone could be made to look silly by Wade Davis), or the situation (though this one certainly did hurt); instead what is relevant is where the pitch ends up.

Castro’s plight is understandable—it’s an offering that has the appearance of a slow fastball, left right over the heart of the plate, ready to be crushed into the stands. That is, until the straight fastball reveals itself to be an 84 mph curveball, whose bottom falls out and becomes practically unhittable. This kind of pitch, whether it be a curveball or, as you’ll see in a second, a slider, is incredibly enticing for a hitter until, well, it isn’t.

The problem that arises from trying to hit a buried breaking ball is obvious: you can’t drive it. No matter how many times Castro tries to swing at that pitch, things aren’t going to get better. Right now, that means sporting a .133 batting average against the breaker in the dirt, complete with zero extra-base hits. Still, the experienced-but-young hitter can’t protect himself against the appealing properties of his kryptonite. 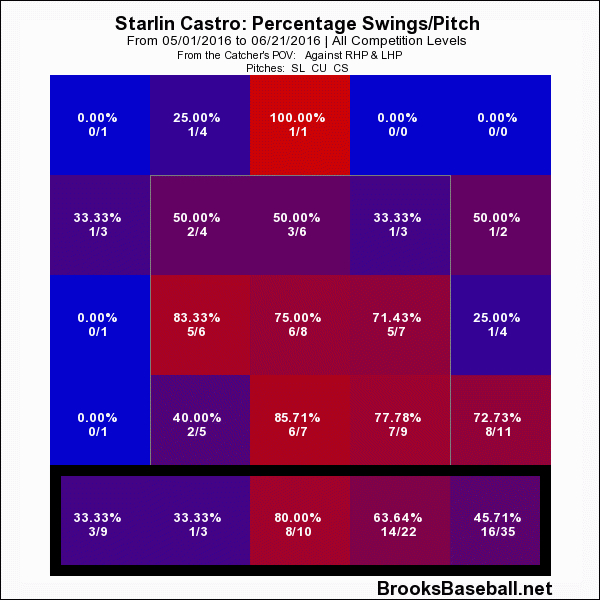 This may sound surprising, but Castro knows exactly what is going on. He’s aware of the opposition’s form of warfare, but has been helpless when it comes to keeping the bat on his shoulder. When talking about the differences between the American and National League last week, the 26-year old mentioned AL pitchers have “been pitching me different than they did in the National League…The National League pitchers are more aggressive. More fastballs. I’m a fastball hitter.”

Pitchers in the American League have preyed on Castro’s aggression with the low breaking ball, but that isn’t exactly something foreign to the former Cub either. “In the National League, too, when I struggled, they threw me more sliders.”

Hopefully Castro will begin to stop swinging at the slider in the dirt—and his awareness of the issue is encouraging—but the results thus far are worrisome. The league has thrown him a curveball or slider in the bottom part of the zone 126 times this season, and Castro has swung at it almost 48% of the time. When he’s been so unsuccessful against a pitch that is almost always called a ball, offering at it nearly half of the time isn’t ideal.

You’ll remember that Castro had a torrid start to the season, hitting .305/.345/.488 in April. Then again, that month may feel like a distant memory because of his .224/.257/.368 line and 64 wRC+ since. This disparity between April and June/July could have something to do with Castro’s Achilles Heel.

Although pitchers didn’t really change the frequency at which they threw sliders/curveballs down in the zone, Castro’s plate discipline fell apart. He offered at the pitch just 25.5% of the time in April, but that mark increased to 53% from May onward.

As expected, this problem has caused Castro to struggle against breaking stuff. As a self-proclaimed fastball hitter, less success against secondary offerings is acceptable…but a .173 and .133 batting average on the slider and curveball, respectively, just isn’t going to work—especially when pitchers are going breaking ball heavy against him like they are right now.

This vulnerability has had a ripple effect through Castro’s game. Pitchers are turning up the heat on two-strike counts, making it all the easier to strike the righty out. The elevated strikeout rate cannot be explained away by the low breaking ball, but it isn’t helping Castro. Naturally, the Yankee has also seen his contact outside of the strike zone fall to a career-low and his whiff rate shoot past his previous career-high by 1.7%.

There’s a lot to unpack here, and none of it is good news. As an optimist, though, I’d like to point out that, on the bright side, Castro is aware of the issue and has worked out of it before. In a new environment in the midst of a prolonged slump, adjusting may be hard for Castro, but he’s done it in the past and is a talented hitter. After all, Castro knows what has to be done, and realizes the positive effects a change would bring: “When I start to feel better, they have to come with the fastball because pitchers will see I’m not swinging at the slider in the dirt.” Now, it becomes a waiting game for Castro to feel better.