Baseball games are won with depth, not stars. That’s a gross simplification, but that doesn’t mean it’s inaccurate.

Because of the way players are deployed in the sport, it is very difficult to put your best players in specifically for the most important situations. Therefore your sixth-best hitter needs to be passable because he could come up with the game on the line. Your fourth starter ought to be OK because he might start in the first game of a critical series against a division rival. The bullpen is the exception to this rule, but it rarely contains a team’s best players.

If you ranked all of the players on a 25-man roster from best to worst, those ranked 20-25 might be more or less interchangeable, but the guys from 14-20 are crucially important to a team’s success even if they aren’t big names or even particularly good at their jobs.

For the New York Yankees, Chasen Shreve is one of those guys in the middle. With the dynamic duo of Andrew Miller and Dellin Betances firmly entrenched at the back end of the bullpen, Shreve rarely sees the highest-leverage situations. However, when he’s gotten into the game, he’s excelled.

So far, the southpaw has a shiny 6-1 record that goes with an equally shiny 1.88 ERA giving him traditional stats that gleam enough to enthrall magpies and irritate the hungover.

While his peripherals are not quite so luminescent, his 3.19 FIP, 0.6 WAR and 8.92 K/9 marks are all very solid. Shreve is the classic example of a middle-roster player exceeding expectations on a successful team.

The Yankees are not succeeding because of Shreve, but their surprisingly good season can be explained, in part, by the fact they are getting performances like the one the left-hander is giving them.

Speaking about Shreve specifically, it would have been hard to see this coming. The lefty was excellent in a 12 1/3-inning audition with the Braves last year, but he didn’t look like anything more than a southpaw middle reliever before he came to New York.

That may ultimately be his fate, but for now he looks like something a little bit more interesting. Shreve is not a run-of-the-mill LOOGY type, in fact he’s held right-handed hitters to a .136/.216/.250 line this year.

His ability to shut down right-handers is because of a rather special splitter that he can use as an out pitch regardless of an opposing hitter’s handedness.

Shreve has thrown the pitch 28.3 percent of the time, up from a mere 7.8 percent in his brief time with the Braves, and it’s clearly been his best offering.

When looking at a reliever like this standard small sample size warnings apply, but it’s clear Shreve is getting results with the pitch.

Not only does his splitter have bite, he’s located it perfectly below the strike zone where it needs to be. 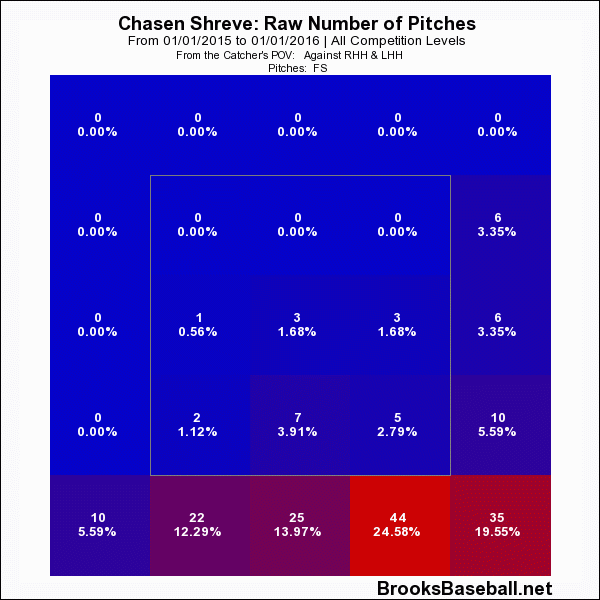 If left up, this pitch can be hit a long way, but Shreve has almost never made mistakes in the zone with it. Instead he has stayed exactly where the whiffs are. 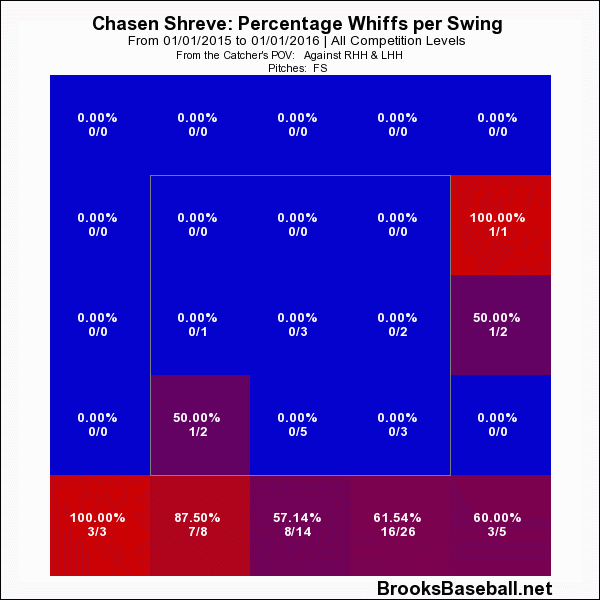 At the end of the day ,Shreve is a left-handed reliever who doesn’t close. He’s never going to get much credit for the Yankees’ success. Strictly speaking, he doesn’t deserve much. But he does deserve some.

Shreve is a small cog in the big machine that has been a winning Yankees team in 2015. He’s not irreplaceable, but he’s not disposable.

He’s beginning to feature his nifty splitter more and more as the season goes on and that’s going to make him less limited than some of his southpaw compatriots. 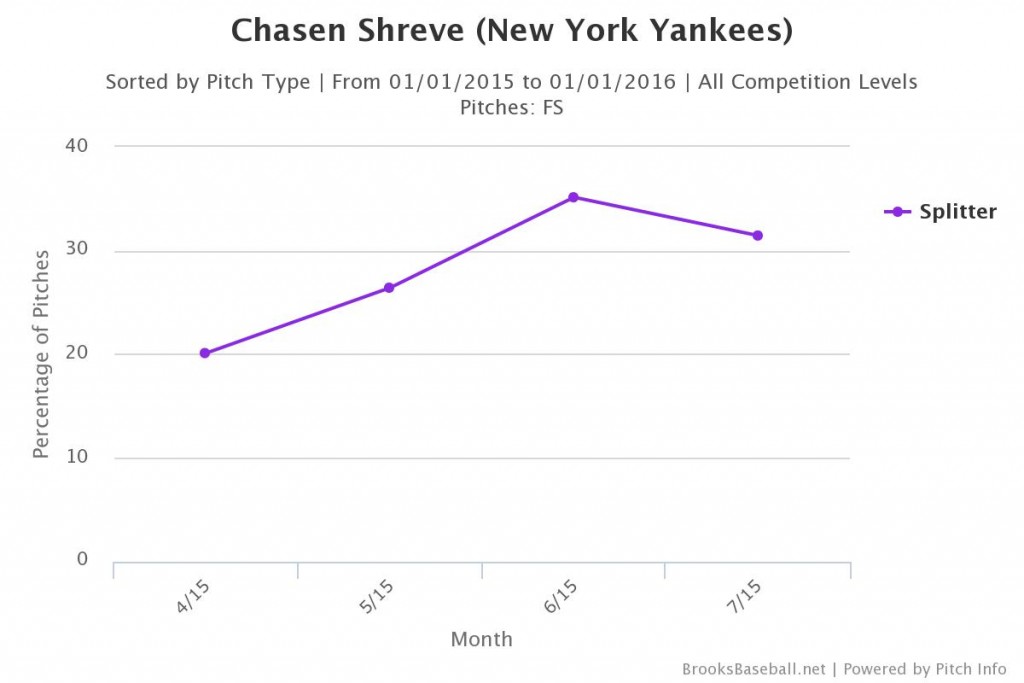 When the story of the 2015 New York Yankees is told, Shreve will not feature prominently, but he is the type of player you can never have too many of.