The past week of Yankees baseball brought an unlikely carousel of names to the major league roster thanks to the 19-inning marathon with the Red Sox on Friday, April 10th. The bullpen was exhausted and needed fresh faces, but without an actual injury and due to an odd rule, the Yankees were not permitted to call up a player from the Opening Day 40-man roster until the tenth game.

So down went Friday night relief hero Chasen Shreve and in came Kyle Davies, a non-roster invitee to spring training who hadn’t pitched in the majors since 2011. He appeared in one game, pitched 2 1/3 innings, and was immediately designated for assignment to acquire another fresh arm. Next up was Matt Tracy, a 24th round draft choice from 2011 who defied expectations by actually reaching Triple-A within a few years, but wasn’t really considered a legitimate prospect. Like Davies, he made one appearance, threw two innings, and then was gone. His Yankees tenure might have lasted 24 hours. In fact, finally making The Show was his last act with the organization, as the Marlins claimed him off waivers on April 18th.

Although it might have been disappointing for Tracy that he only played one game with the team that drafted him, he did meet a better fate than several Yankees who were called up but made nary an appearance. The next day’s call-up, Joel De La Cruz, could end up like that, as he was on the roster for two days in Baltimore and did nothing other than bond with Esmil Rogers before getting demoted. These kinds of players are called “phantom players,” or “ghost players.” (No, they aren’t the invisible Molina-esque runners who could only move base-to-base in the games you played in your backyard.)

It had to have been extremely exciting for these players to have the opportunity to dress in the same locker rooms as guys like Mickey Mantle and Derek Jeter and sit in the dugout during a game with the team, sometimes at Yankee Stadium, ready to be used in an actual game at any time. Regrettably, none of them made it for one reason or another, and none ever played a major league game for any team at all. These are the Phantom Yankees:

The Yanks have just had an awful run of first-round picks pretty much since that sixth overall choice they made in 1992, when they acquired some Michigan-area shortstop. In the 22 years since then, it’s been a string of disappointments, whether it was awesome picks who didn’t sign (Mark Prior/Gerrit Cole), exciting minor leaguers who never seemed to truly put it together for them in pros (Phil Hughes/Ian Kennedy/Joba Chamberlain), or, the majority of the case, players who just weren’t great picks at all. Now they seem to have done a better job the past couple years adding talents like Aaron Judge into the system, but for many years, it was just a whole lot of nothing.

Parrish, their 2000 first round choice, was selected around the nadir of selections between 1996 (Eric Milton, traded to the Twins in the Chuck Knoblauch deal) and 2004 (Hughes). Although a Michigan product like Jeter and the son of eight-time All-Star Lance Parrish, Dave was even considered an overdraft at the time. Sure enough, the younger Parrish never hit much above A-ball, as evidenced by his .664 career Double-A OPS and .644 career Triple-A OPS between 2002-08, the heart of an offense-heavy era. However, Parrish did spend May 13-16, 2004 on the Yankees’ roster when Jorge Posada got his nose broken thanks to an errant throw while he was on the basepaths. Parrish wore number 57 and backed up John Flaherty, but Joe Torre did not use Parrish at all, even using Flaherty in a day game after a night game. Maybe the saddest part of Parrish’s tenure was that I remember closely following the team that season. I can remember Alex Graman, but I have absolutely no memory of Parrish even being in a TV shot on the bench.

The team and Parrish parted ways early in the 2006 season. While Parrish bounced around the Pirates, Rockies, and Padres’ organizations, he never returned to the majors, finally retiring at the end of 2008.

Parrish will be the Phantom Yankee who has the most information available about him since he was a notable recent bust. Others simply don’t have much known about them at all. Such is the case with Mooers, a shortstop born at the end of the 19th century. According to the amazing resource of Baseball-Reference Bullpen, we know that Mooers was once described as “Richmond’s Mr. Baseball,” although that was mostly because the Richmond native later owned their minor league club for over 20 years.

As a player, Mooers was not as remarkable. He did however hit .280 with a .415 OBP in 22 documented games for the Richmond Colts in the Class C Virginia League in 1918. That impressed future Hall of Fame manager Miller Huggins enough to invite the 20-year-old Mooers to spring training in 1919. Unfortunately, he had a sore arm, so while he made the club, he rode the bench for about a month before being sold to the Pittsfield Hillies of the Eastern League. He played six more seasons in the minors scattered between 1920 and 1932 without ever coming particularly close to the majors again.

As Richmond’s owner, he reportedly refused to have his team take the field in a 1946 exhibition game against Jackie Robinson’s Montreal Royals, so you know what? He didn’t deserve to be on the major league roll call. Screw him. 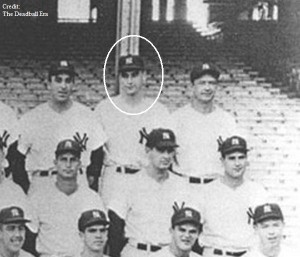 Occasionally, a Phantom Yankee gets into the right place at the right time. That was definitely the case for 17-year old Rudy Serrett. He was a lefty pitcher signed right out of Flushing High School who pitched well in brief work for the Peoria Chiefs of the so-called Three-I League and wily Casey Stengel called him up to a team that would go on to win their third straight American League pennant. The Yankees fought off the White Sox to clinch another World Series berth, but Serrett was never used. That’s hardly surprising considering he was a teenager who had never even pitched above the now-defunct B level. Four more minor league seasons led nowhere, but hey, at least Serrett managed to make his way into team photos!

There’s never appearing in a major league game despite being on a regular season roster, and then there’s never appearing in a major league game despite being available for a World Series roster. That was the case for second baseman Chester Trail in 1964, when the Yankees came from behind to surprisingly win the 1964 AL pennant under Yogi Berra. A strange rule allowing teams to have a 25th man available in case of an emergency despite not being on the roster was in play that year, and Trail was the Yankees’ 25th man. He was steady with a .257/.349/.400 triple slash for Greensboro, but the Yankees were hardly pushed to use him. Trail and the Oakland A’s Mark Kiger (another second baseman) remain the only players to ever be on a postseason roster without ever appearing in a regular season game, but Kiger made it into a couple 2006 ALCS games! Too bad for Trail.

Another product of unusual circumstance, the righty pitcher Ricks was at one time an intriguing prospect. A sixth round pick in the 1972 Draft, Ricks worked his way through the system and was on the doorstep of the majors at Triple-A Syracuse from late 1974 through 1976. He was steady but unremarkable there with a 4.27 ERA despite some very shaky control (5.3 BB/9). The only time Billy Martin ever even made him available though was near the start of the ’77 season when starter Catfish Hunter went on the disabled list.

Ricks spent a little time on the roster, narrowly missing a start when Martin (rightfully) tabbed future ace Ron Guidry over him to make a start when the newly-acquired Mike Torrez was unavailable. Ricks returned in September and again did not pitch. Shortly thereafter, he suffered arm problems and was gone from the game by the end of the decade.

Werly is just amusing. He played generations after Mooers and Serrett, but there is somehow less baseball information on him. A righthanded starter, he was selected in the ninth round of the 1977 MLB Draft and persevered through injury which kept him out of action for the entire ’79 campaign to catch the Yankees’ eyes with a 2.59 ERA and 193 strikeouts in 222 innings (18 complete games) with Stump Merrill’s Nashville Sounds of the Double-A Southern League in 1981. He was named the top player in his league, and Bob Lemon put him on the ’82 Opening Day roster.

Nothing ever came of Werly’s time in the pros though, and soon he was off to Triple-A Columbus when their season started. He got clobbered. Injuries continued to dog him over the next couple years, perhaps in part due to the exhausting complete game total in ’81, and he left baseball after 1984. He did have a Harvard education though, so he maybe he did wel–Oh. You’re so creepy, LinkedIn.

The Yankees don’t seem to have much luck with non-Jeter Michigan picks. Wilcox was a 1995 third round pick out of Western Michigan right in Jeter’s backyard of Kalamazoo. He could never quite shake the label of just being an “okay” prospect though, even as he moved on from the Yankees to the Mariners’ and Devil Rays’ systems after ’97. Brian Cashman brought him back into the fold in 2000, and in mid-July, he was called up to the team that would “three-peat” that October.

Wilcox only got his shot because popular reserve Shane Spencer tore his ACL on July 9th and was gone for the season. Both Wilcox and veteran Ryan Thompson when the team started back up again on July 13th after the All-Star Break. Although Wilcox was a lefty with a possible platoon advantage, Thompson started over him for two days, and Wilcox went back to Columbus once the Yankees were permitted to activate super-sub Clay Bellinger again. Wilcox only had one more season and a half in him before he retired. He is now an orthopedic surgeon and is apparently still advertised as a “former major leaguer.” Just let him have this, guys. Who cares about Ryan Thompson anyway?